Since the previous discussion about the new sky Terran composition in TvZ, the sky Terran play style has evolved. The recent games have provided answers to some of the questions I have brought up in the last discussion.

First, let’s revise some of the questions I previously had.

I will address these questions in the discussion below.

To be fair, it’s still hard to judge if the composition is going to stay as a viable option in the long run, because it is mainly TY who makes it work. TY is the undisputed best Terran right now, and perhaps only Maru is around that level. TY simply destroyed everyone in the SSL qualifier few days ago, and he made others look like they didn’t deserve to be on the same stage. Thus, what works for him may not necessary mean it is “viable” for other players, and the fact that other Terran players do not adopt the sky Terran composition makes me wonder what their verdict is.

I believe TY will continue to have success with this composition, and others will follow him. Subsequently, this will become more mainstream.

Despite the sky Terran composition is not popular for other Terran players, there is little doubt that every Zerg is wary of the threat. In the vod below, BrAvO intentionally showed Leenock two Starports early on and made enough Banshee and Liberator to look like he was going for the sky Terran composition while he was actually going for a standard bio composition. Leenock took the bait and went for a Roach and Hydralisk composition (made more Roaches because it was in fact against bio). Since Leenock took three Hatcheries at the same time, it is safe to assume he really thought he was playing against sky Terran.

I believe the sky Terran is the new age “mech”, or at the very least, the best non-bio composition right now. Whenever mech was popular in the metagame, the opponent would always be concerned about whether bio or mech would be used. This led to mind game in the early game whereby the Terran player would try to fake one composition and use the other. Sometimes Terran took it a step further and switched composition in the mid game stage to truly throw the opponent off guard.

The same tech switch mind game trend can be observed in the current TvZ metagame as we have seen in the above vod. In fact, TY had demonstrated how he tried to use this in his favor the Bo5 series against Dark in the CrossFinal.

In game 1 (above), TY went for 15 gas Reaper expand, which is getting more common nowadays, and went for the sky Terran composition. The advantage this opening has over the standard 16 gas Reaper expand is that the Factory is down earlier, and hence, you have quicker access to the Starport. However, the disadvantage is it cut corner by not producing any Marine, and this allows an Overlord to scout unopposed. Dark literally had an Overlord on top of the Terran production buildings, and TY took the Concussive Shell upgrade to fake that he was going for bio (see below image). 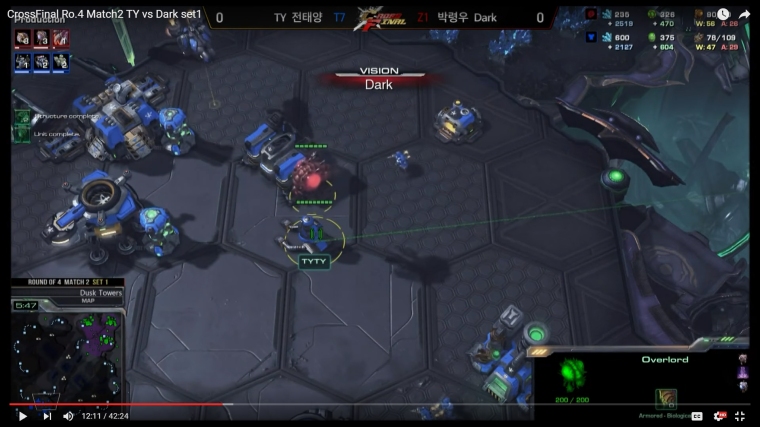 Although the Starport on the Reactor was a good telling sign that it was likely to be sky Terran, it could still just be a Liberator heavy build order. I have to give credit to Dark for his amazing scouting that he flew another Overlord back in just to be sure. He was rewarded by the information that TY no longer had the Barracks on the Tech Lab, which suggested it was a fake.

In game 2, TY opted for three Barracks Reaper, which basically suggested that he would go for a bio composition (it is still possible to switch to sky Terran), and the game ended early due to a build order counter. The real magic happened in game 3 (above vod), whereby he invested more than just a fake Concussive Shell upgrade to sell his mind game. He used a recently popular bio build that had a Widow Mine drop and a small Marine Tank Medivac pressure follow up. Subsequently, he put down two more Starport and transited into a sky composition. The build order he did usually has a bio composition transition as you can see in his game against soO in the SSL qualifier (below vod). Bomber also had used it against soO in the same qualifier.

The composition mind game continued in game 4 (below vod). TY did a reverse by faking a sky Terran composition, then transited into bio. One of the key components of the sky composition is the Hellions, which allow you to spend your mineral to have the right mineral to gas ratio for your production (better than ungraded Marines). Together with Banshee, these two units define the build orders of sky Terran, because they are great against Zerg early game and require no extra transition effort. With this in mind, TY opened up with a Hellion Banshee opening, which appeared to be sky Terran and could also transit into bio easily. I am actually surprised that no one really talked about the composition mind game of this series.

Based on the two games I have discussed in part one, it was fair for me to suggest that Hydralisk appears to be the better counter than Corruptor. However, the recent games have shown that Zerg players aren’t sure what work well against sky Terran, and DeParture even used Zerglings and Mutalisks (below vod). As expected, these two units aren’t the answer.

The general consensus seems to be either Corruptor or Hydralisk, and then mix in Infester and Viper in the late game. The results are mixed.

Obviously, the sample size is too small to be conclusive, and the results should also vary according to players. However, interestingly, both of the games that Zerg chose Corruptor are played on Dusk Towers, so map should also play a part into the decision making.

Anyway, it was interesting to watch both Dark and TY utilised late game units in game one, for example, Ultralisk and Ghost.

In the end, the proposed balance patch to change Banshee’s speed upgrade did not happen.

However, we have a nerf to the Liberator in the recent patch.

Since both Corruptor and Viper are armored units, Liberator deals lower damage to them now. This may result in Zerg players to favor Corruptor over Hydralisk when they deal with sky Terran. With that being said, I welcome this nerf as I agree with Blizzard’s argument that Liberator is filling too many roles too well.

Let’s just sum it up by answering the questions I listed at the top explicitly.