Like many others, I have started playing Overwatch, which is the newest first person shooting (FPS) game by Blizzard. It is quite an interesting ride for a real time strategy (RTS) player like me.

Similar to Heroes of the Storm, which is the multiplayer online battle arena (MOBA) game by Blizzard, Overwatch requires the players to fill certain roles in order to be effective in accomplishing the map objective. Based on my extremely limited knowledge of the genre, I believe this is the only mainstream FPS game that has specific roles, and such team oriented design is less familiar to many RTS players. I actually received the first wave of Overwatch close beta, but I wasn’t exactly interested in it back then.

I don’t have much experience with FPS games other than playing Counter Strike (fifteen-ish years ago) and Call of Duty (at least eight years ago), and the combined FPS experience is probably no more than ten hours. As expected, I struggle a lot in Overwatch. 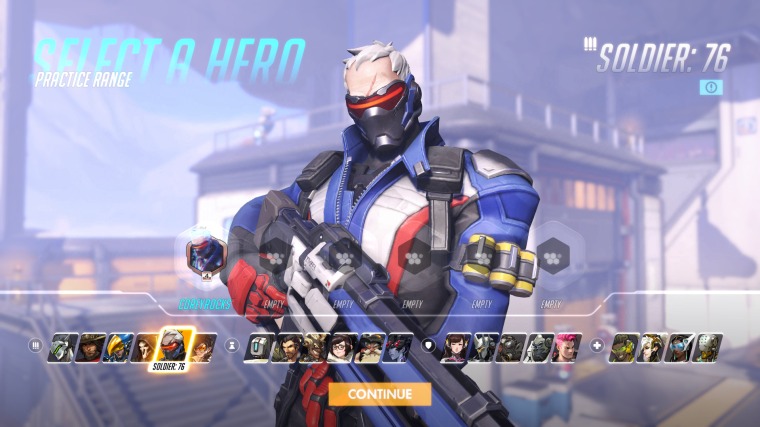 I took the advice from a few friends and started playing the game with Soldier 76 (above image), who is considered the most newbie friendly character. As intended, the character design feels familiar to anyone who has at least played a FPS game before, so the choice did help me to learn the game better. Interestingly, every character in the game has unique flavour and personality, but Soldier 76’s personality is his lack of personality in a way. Literally a soldier. 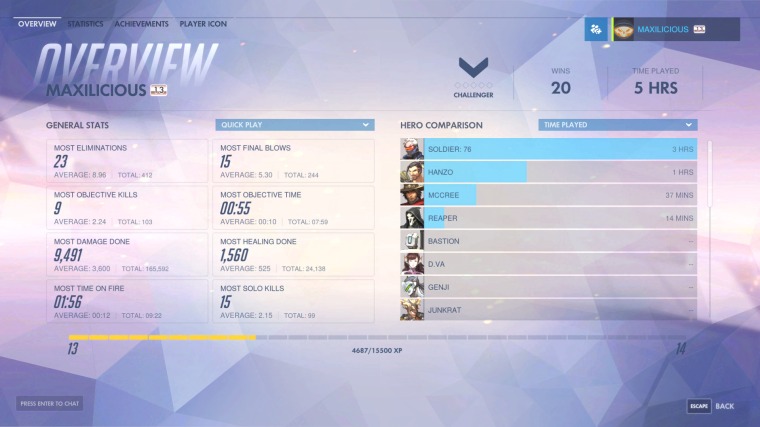 I have played the game for five hours so far, and I consider myself to be of bronze league skill level. I can just walk off the cliff and kill myself without any external factor when the game has just started. The general experience improves as I begin to understand the basics better, but I am still limited by my extremely poor mechanics. I can go around to backstab someone, and yet I cannot kill the person after I have reloaded twice. That shows how bad my aim is.

Unlike Starcraft’s settings, Overwatch’s in game mouse sensitivity setting overwrites the mouse’s setting, so it doesn’t matter what my mouse DPI is. I usually use 1000 DPI for 1920×1080 in Starcraft, as it allows me to move my cursor end to end across the screen horizontally without lifting the mouse or stretching my wrist uncomfortably. In RTS games, you need to move your cursor away from the middle and back repeatedly, so the mouse sensitivity cannot be as low as in most FPS games. The default mouse sensitivity for Overwatch is “15” in game, and it is too sensitive even for a layman like me. I changed it to “10”, and eventually settled on “6”. The key is to have the right balance for aiming (lower is better) and movement (higher is better). Things got much better once I found the sweet spot.

Apart from walking off the cliff, I have other comical moments. I actually got lost in the map and could not find the way out of my base for a period of time. The funniest moment was when I was using McCree, whose ultimate skill is to channel an ability and headshot those you have locked on. I actually managed to lock on four players by flanking, but none died. Why?

I didn’t know I need to click shoot to activate the skill, and I just stood there. -_-

This reminds me of the silly things I did when I just picked up Starcraft II in 2010.

There are actually quite a few nice Starcraft related stuff in the game. Look at the images below. 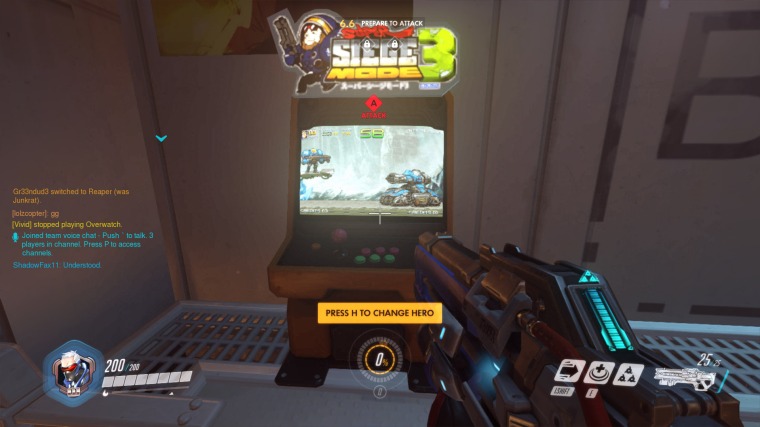 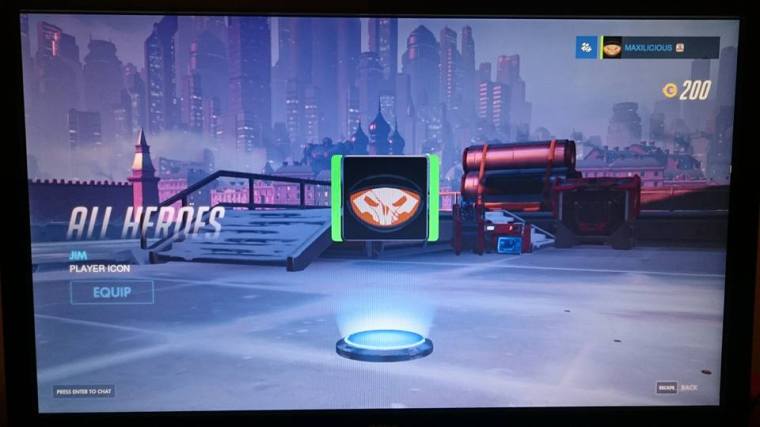 The first one is a reference to Metal Slug with the Marine and Tank of Starcraft, and the second one is a Jim Raynor player portrait (the screenshot wasn’t working, I took a picture). I hope you are jealous of my Jim Raynor portrait loot. Hehe.

The background story of D.Va is spot on. She is a former progamer, and she is also Korean (duh…). She basically is “either bio or mech”, because she can suit up into a mech. One of the abilities is self-destruct, and the ability line is “nerf this!” I lol-ed when I first encountered it.

I was playing with some friends who are way ahead of me in experience, and they kept telling me about how I should play my character. For example, what my role is, what is my effective range etc. They also tell me how different characters play differently. In a way, I understand what they say, because I play enough games to understand how things work and I am a decently good learner. But there are so many factors that limit how I perform, and this actually gets me thinking about how people evaluate the Starcraft content I have written. Occasionally, I receive emails about learning Starcraft, and I sometimes have problem understanding what others don’t understand. This Overwatch experience puts me into perspective, and hopefully this makes me a better Starcraft writer. 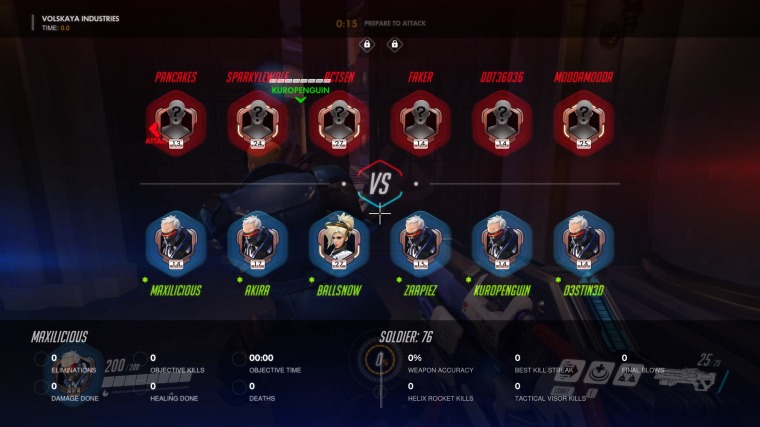 We also played a Terran game. Five Marines and one Medic.

The one thing that I love about Overwatch is its aesthetic. The colour scheme, character design, menu interface and background story are very well done. I love the tone of yellow and navy grey, and I wish I could use it for this blog (limited by the template design though).

Oh, the game is literally at my door step. 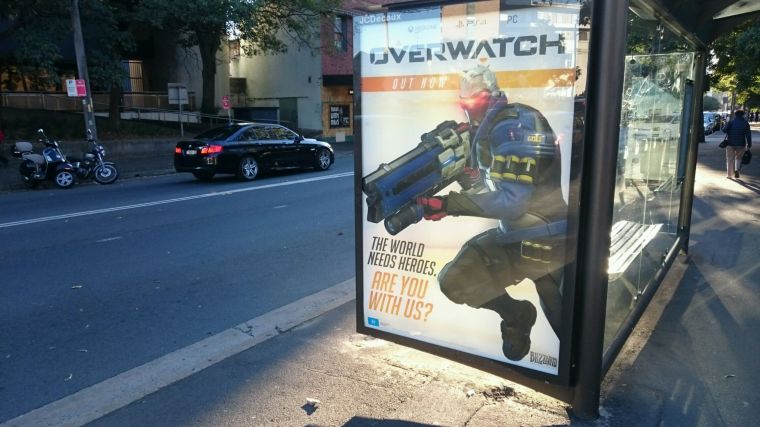 You may have watched the Overwatch cinematic trailer from Blizzcon 2014. Make sure you don’t miss the animated shorts below even though you may not play the game.

2 thoughts on “Playing Overwatch as a StarCraft player”