I had more than just fun at Pig Story Cup (or PiG would have called it PiGSty Cup) yesterday. It is basically a Home Story Cup type of event without the professional players and monetary prize pool. Just Starcraft, beer, BBQ and chill at PiG‘s place. 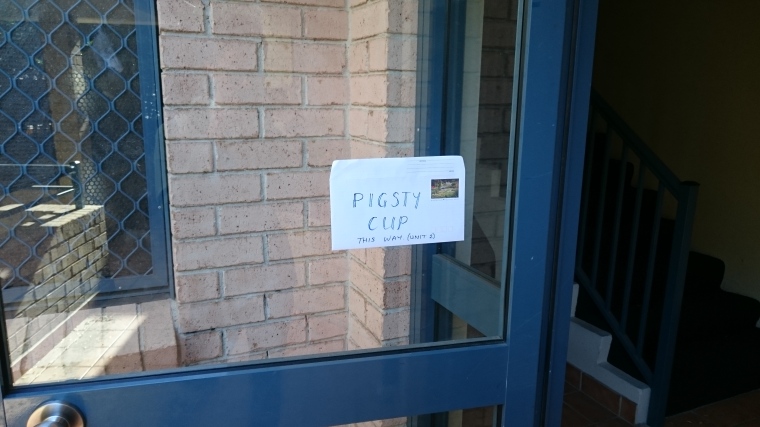 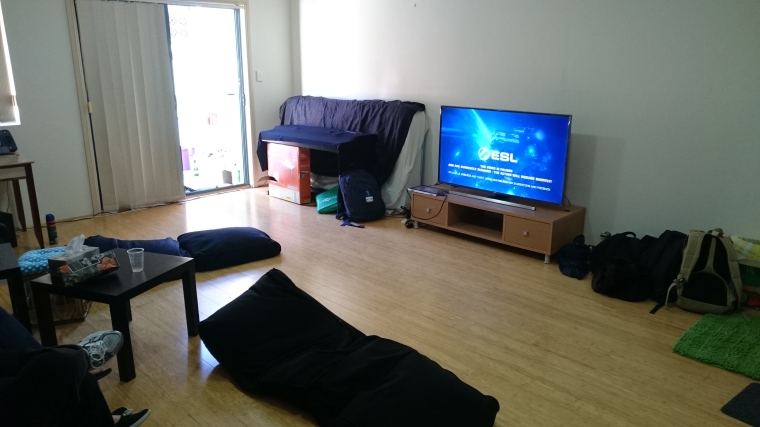 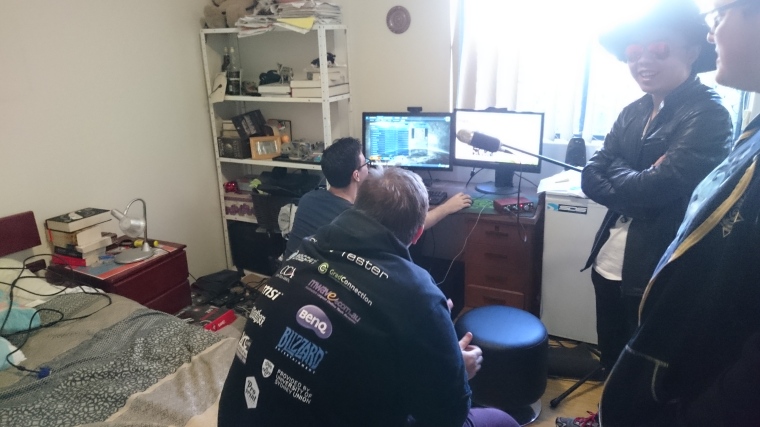 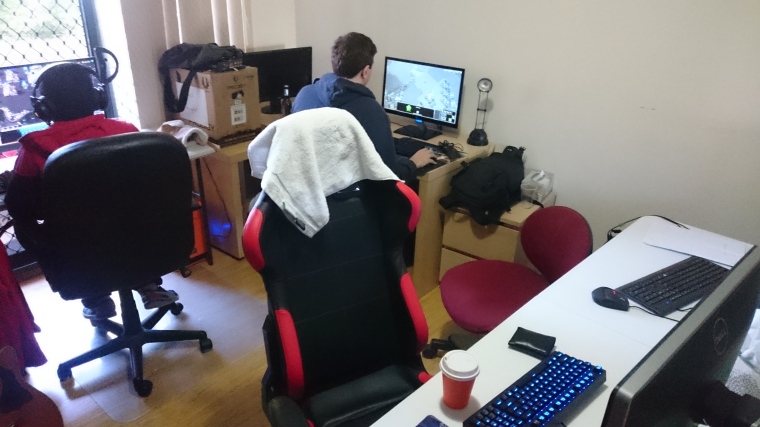 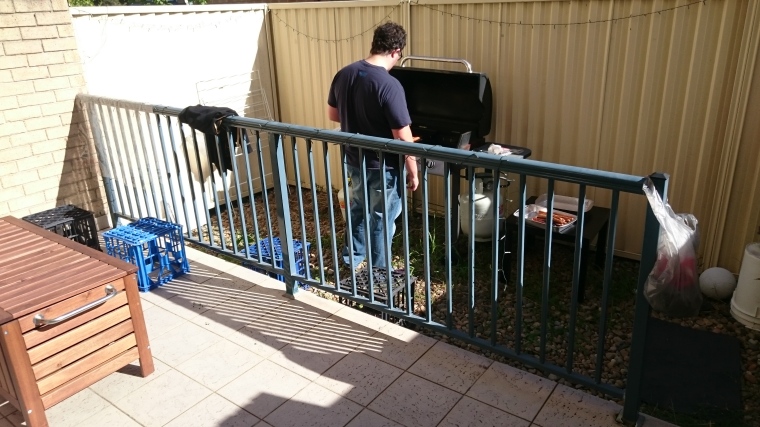 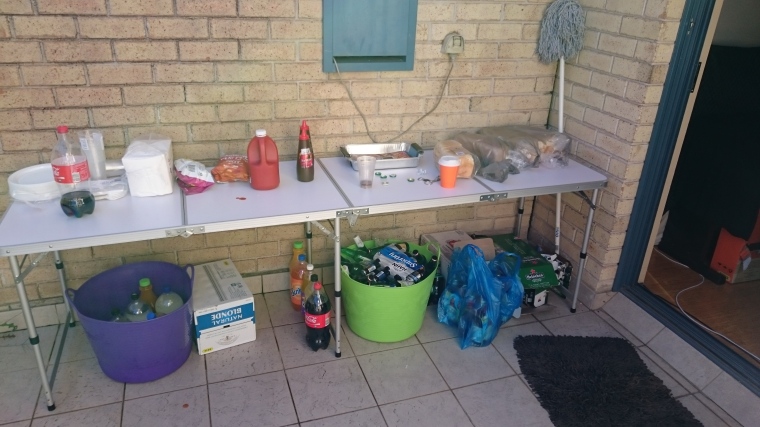 The images you see above show the main areas. The casting room is the room with the mic and everyone just hung around. I didn’t know the stream had just gone live when I went into the room. The playing room has four computers, so we had two matches happening at the same time. The living room is where we watched the stream. And of course, there is a BBQ area at the backyard.

Almost everyone played in the tournament and it was as professional as it could be. The image below is the bracket of the groups. The paper actually went missing, and the picture on my phone became the official bracket. The planning behind the tournament format was pretty straightforward. You could literally look at your opponent’s screen at the side, but most were too focused with their own screen. I was actually tickling Vivid’s chin while he was playing at the start (like how you do it to a puppy), but he wasn’t even moving. I was speaking to his opponent’s ears that Vivid was spawning at the bottom right (two player map) and he was making Drones, but he couldn’t even hear me. 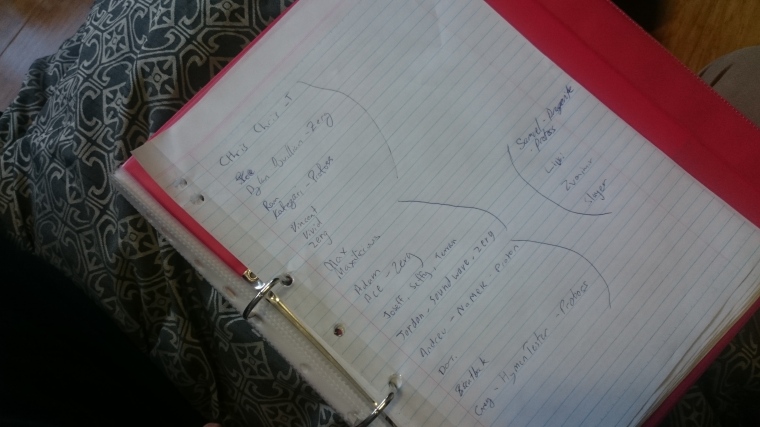 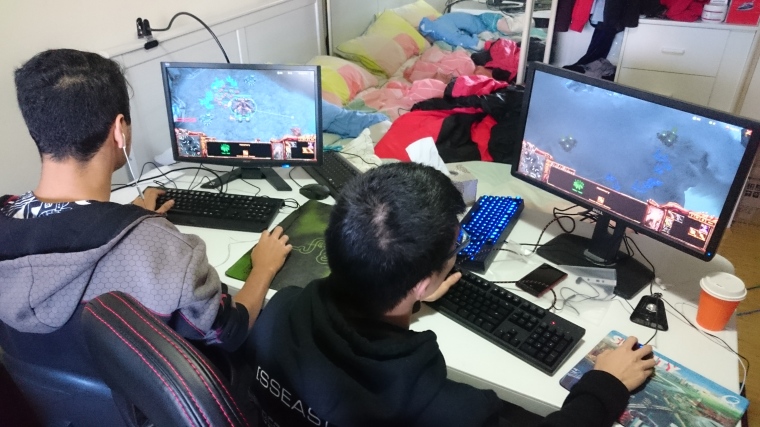 I think most of us were playing with beer as fuel.

It was really funny when I logged in to my account after such a long period of time, the achievement notifications just keep popping up in the main menu. I expected myself to play like a silver or gold at best, because I haven’t played for seven months (basically I have only played a few Legacy of the Void games). I prepare myself by asking a Zerg player when should the first Supply Depot be down. I couldn’t remember if it was 14 or 15. I doubt I could even win one game.

To my surprise, I actually won my first game against a top eight diamond player. My basic understanding and thinking process were better than I expected. It was kind of funny when my muscle memory automatically told me to click f1 and f2 for camera hot key. Strangely, the camera hot keys and group hot keys couldn’t work, and I thought it was my poor mechanics. I later thought the hardware may have software that overwrites my in-game hot key settings, because I wasn’t using my keyboard and mouse. The truth was in fact a software running at the background that reads my ctrl + X command for that program instead of Starcraft. It was really funny when I didn’t have camera and group hot key that I have to move my cursor around to find my stuff, and the mouse sensitivity is a lot higher than what I normally use. I actually had my Factory flying to opponent’s side, while I was wondering where my Factory was. It was pretty funny when I was shouting “where’s my Factory?”, I got to explain to my opponent that the flying Factory wasn’t a BM.

The one thing that I found interesting was my tendency to forget about Legacy of the Void changes. I didn’t make a single Liberator in TvZ, and I didn’t load sieged up Tanks into Medivac in TvT. The last game ended with me looking for my stuff and caught a glimpse of it being destroyed while the units were on move command.

I must say the event reignited my passion to play Starcraft again. It is important to get reminded that people enjoy the game. 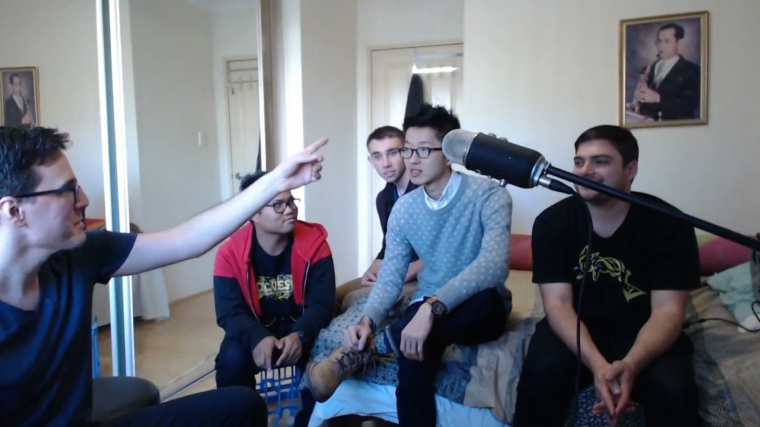 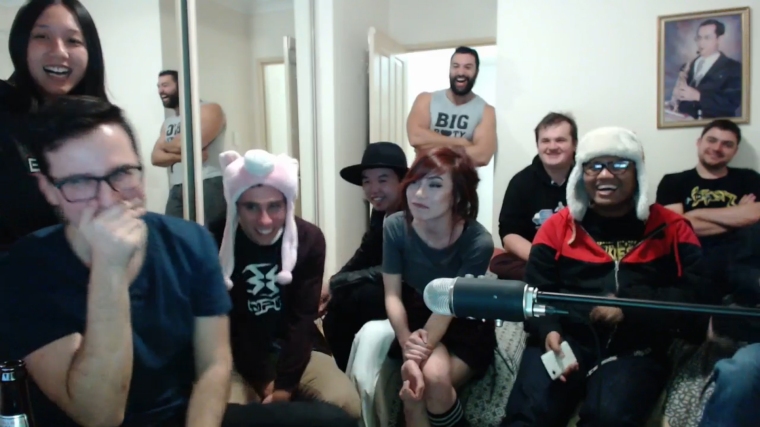 Look at the treasures that I have found at PiG’s place. 2013 WCS cards! There are some unopened packs. I wanted that Taeja card so much! Oh, there are many pigs. 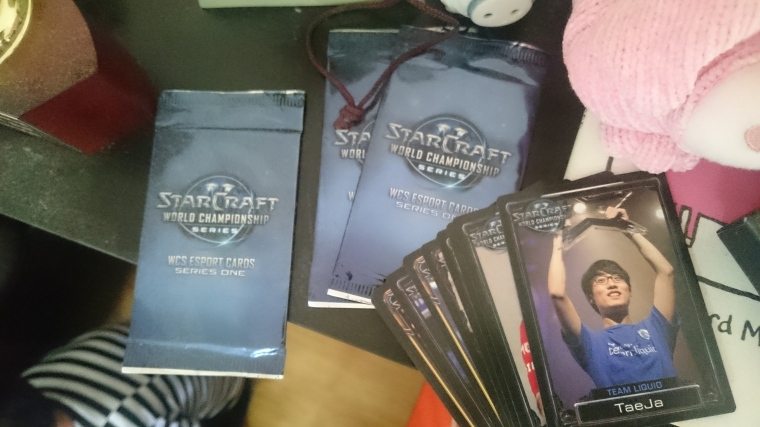 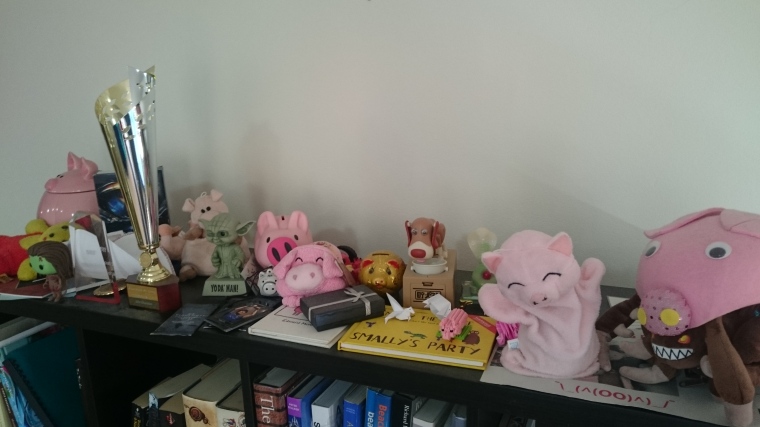 The tournament ended at 9pm with Vivid being the champion. It was interesting to watch the FPV of both Vivid and Dragonite in the final, as I could tell what went through their thinking process and what were the areas they tend to focus on during the game. 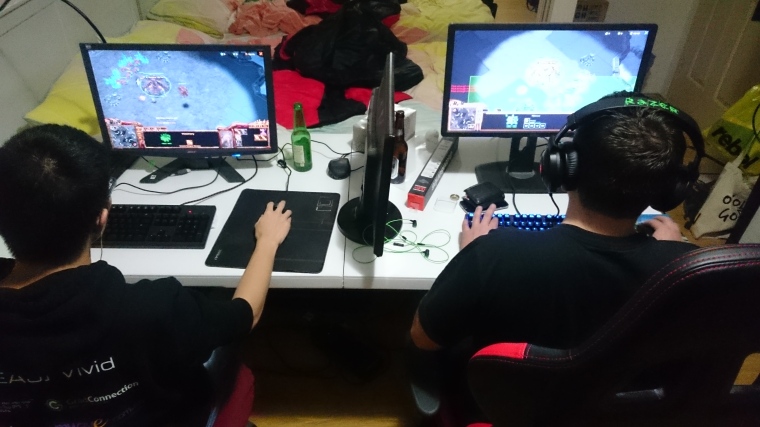 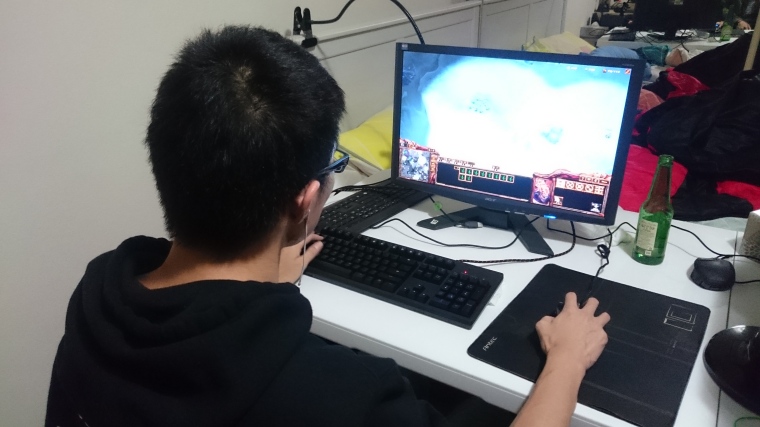 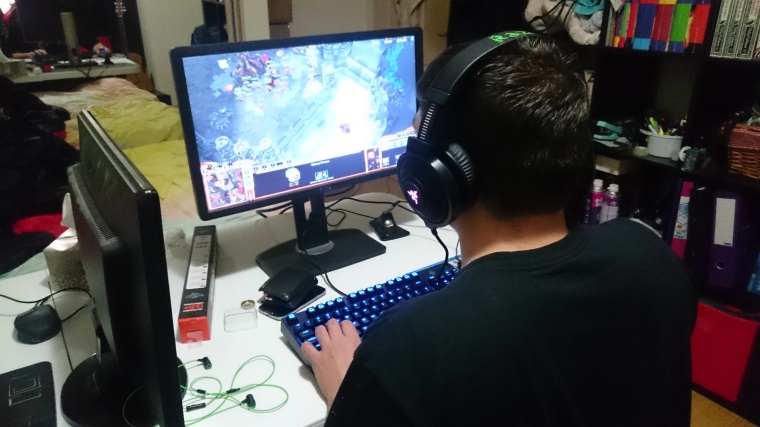 It was an enjoyable day. Everyone just chill with BBQ and beer. The bread with sausage and BBQ sauce is an Australian BBQ staple. At the end of the night, we just watched Proleague.

Here is a funny part on the stream. “Max is more Australian than Polt is American.” Love that inclusiveness. Dear Aussie, at least I don’t win your WCS points.

But I guess nothing beats this. Vivid set up the Baneling mines and didn’t execute it. I saw the whole thing over Vivid’s shoulder. Vivid wasn’t looking there and he only caught the glimpse of it at the end when the last Tank move over the burrowed Banelings. Vivid was whispering “shit…” We could hear the rest shouting and screaming about the missed opportunity in the other room, and Vivid was laughing as well.

Top tips from the man himself.

oh yea!NO ONE SAW THE MISSED THE BANELING MINES!LOL it is a good idea to place a ling on top of them so it alerts you when the ling dies (1) 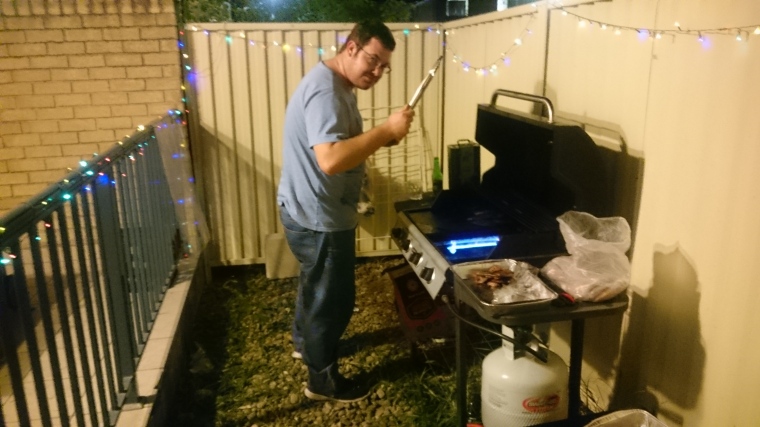 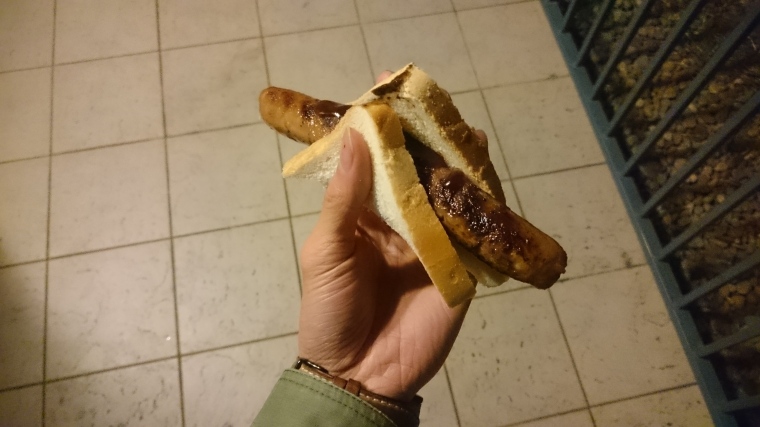 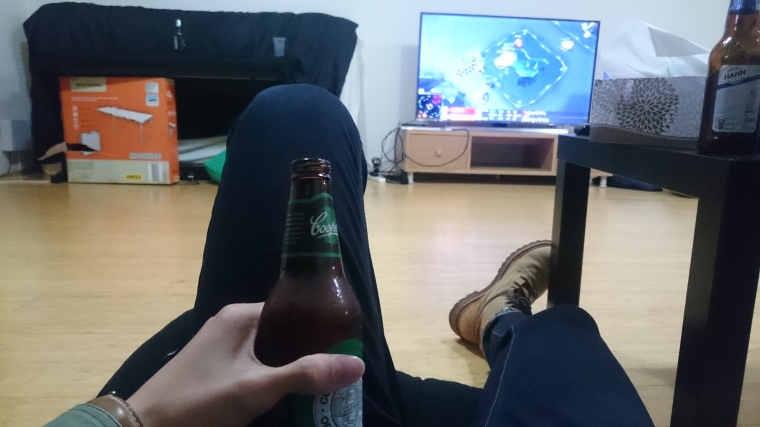 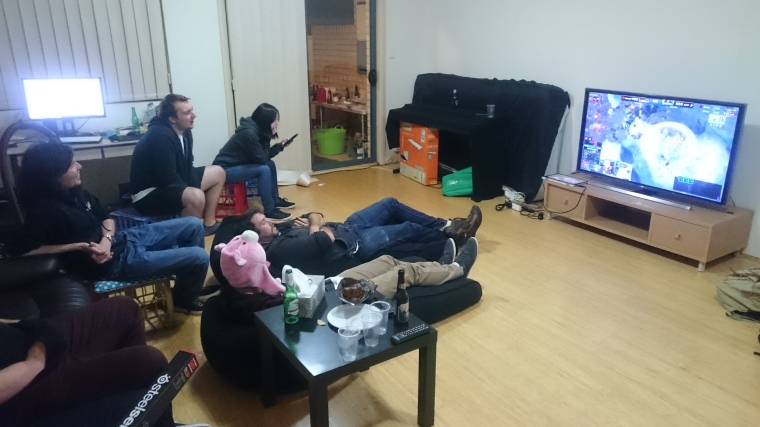 Thankyou so much for everyone that came to the PiGsty cup today. Really happy with how it turned out and looking fwd to refining it!

Thanks for hosting this. =)