Given the rise of various Hellbat timings, Roaches have been seen as a direct answer. Interestingly, this also leads to Terran struggling with the Roach timing. This post is to share my approach to it.

This is based on the assumption that Terran plays standard. By that I mean Reaper and Hellion, or 14CC and Hellion. Usually, this lines up to a quick third Command Centre. Watch INnoVation’s VOD below, whereby he does nothing but the basic TvZ build. The number of Reapers may vary the build order slightly early on, but it still shapes to the Reactor Hellion and three Command Centre convergent point. This build is quite vulnerable to a Roach timing.

First of all, I categorise the “Roaches build” into two. One is a precaution defensive Roaches, and the other is a timing attack. The former simply makes minimal Roaches for defense, and the latter is the focus of this post. The current most popular Roach timing is +1/+1 Roach timing, or usually called the Hyun Roach timing.

The first and most important step is to identify the build. The key give away sign is that the number of gas geyser taken when your Scv or Reaper does the first scout into the main. Unlike a standard 6:00~ Speedling opening which takes a single gas, a Roach timing build does not take gas when you first scout the main. Zerg takes two geysers at the same time after four Queens.

The time when you first scouted there is no geyser taken with a Reaper, you are either producing the second Reaper or just started the Factory. You have yet decided a build order path. That is, you are at the first convergent point (refer to the flow chart below). 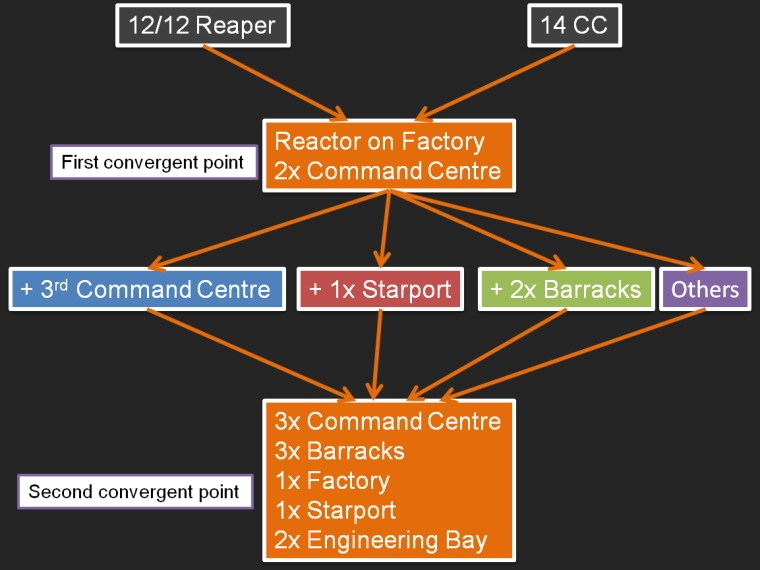 My answer to Roach timing is Banshee.

Many on reddit have been suggesting Tanks as counter against Roach timing. It is definitely not wrong. However, it puts you in a passive mode to anticipate an all-in. This leads to other problems. First, Zerg will probably not commit after the first Tank shots fired. Zerg will have map control through the Roaches, since you cannot move out with the Marines and Tanks. Thus, Zerg will Drone up and spread creep uncontested. Second, this is the time frame when you want to secure the third. The Roaches make it hard for you to land your third Command Centre. Third, you do not know if the Zerg will still choose to all-in, and hence, you probably will continue to make Tank and turtle longer than necessary (goes back to problem one and two).

Banshee is a proactive alternative for Tanks.

Hellion and Banshee combination is arguably the strongest map control early game option a Terran can have in a standard TvZ. The Banshee clearly is good against the Roaches by default. Further, the Roach timing kicks in at 10:15~, by then Terran can have more than three Banshees. I mentioned “more than three” Banshees because you usually stop at two or three Banshees unless you are going for Mech. Assuming you stop at three Banshees, those Banshees basically discourage Zerg to even make Roaches. If Zerg insist on pulling off a +1/+1 timing at 10:15~10:30, the Banshees can kite them all the way back to Terran base. The damage done on the Roaches by the Banshees is more than having Tanks at home.

Steaming from the above thoughts, Zerg is likely to not make more Roaches. Clearly, it is because you don’t make Roaches against Banshees. More accurately, there is no incentive to make more at that point for defense as well. The Hellbat timing with Banshee hits right when the first Banshee reaches the Zerg side of the map. By the time Zerg see the Banshee, the Hellbats should be moving in at the same time. If no Hellbats are seen, then it is not a Hellbat timing. It is just a Hellion and Banshee combination. Therefore, Zerg will not need to make Roaches against Hellbats. Then, in comparison to having Tanks at home, the Banshee and Hellions have so much more damage potential. Moreover, Terran will have the map control and secure the third at home.

This is a two Reaper example.

You can take a look at a recent game in IEM Shen Zhen between Taeja and Life. Taeja did not do this build as a reaction, because he did not scout the main. At least I doubt he did it as an reaction. Life is doing a defensive Roach build and not a Hyun Roach timing. The VOD simply shows you the build order.

2 thoughts on “Playing against Roach timing”