In this short post, I will discuss how having idle workers after build commands can have its advantages, even though the disadvantages are obvious.

Unlike Probe and Drone, Scv has to “stick” to the structure it’s building, and it will just stop next to the building when it’s completed. This is what I mean by idle worker after a build command is issued.

This happens in top level games, as you can see from the GSL final vod below (time stamped). TY’s two Scvs on the top right were not doing anything after the Supply Depots they built had completed. These workers could have been mining, and hence, idle workers are lost mining time.

However, this does not occur every time. In the same game below (different time stamp), TY’s Scv returned to mining right after the Scv had completed the Supply Depot at the ramp.

This is because the Scv had been issued a queued command to return to mining after the building was completed. This can be done by selecting a worker to build a building, then hold shift and right click on a mineral patch. Thus, after the first command of building a building is completed, the Scv will execute the subsequent command you have queued through the shift key and that is to return to a mineral patch.

The question is, do these top players want their workers to return to mining immediately after every building they have built? If yes, then the players are basically not being “perfect” with their mechanics based on what they intend to do within their capability. Imperfect mechanics is actually a plausible explanation because workers idle more often in later part of the game when there are more things happening at the same time, and it makes sense that the players spend their apm and attention on other more important things. Mechanically, it is not that much of a chore to shift click the workers back to mining, especially when you already have the muscle memory down after issuing a build command. This leads me to think about it from a different angle.

What if the idle workers are intentional? At face value, this is lost mining time. But is there any advantage in having idle workers? I think there actually are merits. 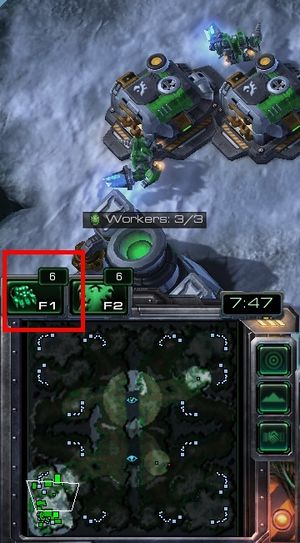 Image is taken from Liquipedia

This idle worker sign in fact tells you that your building has completed if you have no other idle worker. It has two practical implications.

These two implications clearly are not applicable if one has perfect mechanics, but they certainly make macro easier for an average person. Like I have mentioned earlier, idling workers after building happens more often later in the game, and the second reason is actually consistent with this observation.

I actually thought of another less likely reason. You will select multiple Scvs from the mineral line when you want to build multiple buildings, and often you will select more than the necessary number of Scvs when you select them with a “mouse boxing” way. Interestingly, if you issue a queue command for the workers to go back to mining, the unused selected workers will all move to the one mineral patch you have selected and bounce around.

For instance, when you want to build three Supply Depots, you will have to select at least three Scvs. If you happen to select five workers and issue command to build three Supply Depots, three workers will start building the structures and the two unused workers will continue to do what they are doing (i.e., mining). However, when you also have the shift right click on a mineral patch command issued, the two unused workers will move to that mineral patch. This unnecessary movement will mess up the mining workers temporarily, and this is indirectly lost mining time. Therefore, it may be better to not issue a queue command if you are going to box multiple workers. This again is consistent with the observation I mentioned, you only box select multiple workers because you want to build multiple buildings which usually only happen in the later part of the game. Generally, you will select one specific worker to build a building in the early game, and hence, it is better to use the queue command.

Just to be clear, these reasons are based only on my logical thinking through observation, and they are not meant to be conclusive.