Cloak Banshee is a common tech choice for TvP 1-1-1 variations in the last two months. It diverges from other mainstream options and provides a unique twist to the early and mid game.

Cloak Banshee is traditionally an unpopular option in TvP. The last time it was a mainstream metagame choice was back in early Wings of Liberty when the classic one base 1-1-1 push was at its peak. When the starting worker was still six, Terran could not get an early Cloak Banshee and expand. Protoss would go straight to Robotic Facility when Terran did not expand, and this set up along with Photon Overcharge cancelled out many Terran one base tech builds. Thus, the ease of deducing Cloak Banshee made it difficult for Cloak Banshee to make an impact.

Could Terran make cloak Banshee after expand in Heart of the Swarm? Yes, but that was usually an inferior choice. First, if Terran wanted to attack the Protoss’ weakness of not having detection, Widow Mine drop was a much better choice (read the history of Widow Mine in TvP here). Second, it was uncommon for Protoss not to have an Observer by the time a delayed Cloak Banshee arrived at their base. Therefore, Cloak Banshee was not popular in TvP.

With the patch to make Widow Mine visible when it is on cooldown, Terran lost the best option to exploit Protoss’ lack of detection. I was adamant about the Widow Mine nerf when it was first announced, because it changes the build interacts of the match up drastically. To put it simply, Protoss have little incentive to get an Observer out early in PvT. Twilight Council was often the first tech choice because of the Stalker buff. Now, Stargate became the most popular first tech choice in PvT. Robotic Facility is still picked as the first tech sometimes, but it is less effective as an anti-harassment tech than other options. Robotic Facility is picked for builds that required Warp Prism, or when Protoss want to be safe against certain builds with Immortals. Overall, Robotic Facility as first tech with defensive Observers is a lot less popular now.

Interestingly, shortly after the Widow Mine nerf, Maru explored using Cloak Banshee in TvP. The result was mixed, and it was not seen again until recently. This leads to the discussion of the current metagame.

A month ago, the mass Widow Mine drop was the metagame choice for non-passive builds. Recently, Cloak Banshee has become another popular option. This build was the Build of The Week on /r/AllThingsTerran three weeks ago. For the reasons I had already discussed, I had a first impression that it was a one-off build that you just mix in at that time. However, I was wrong. It is an important piece of the current metagame.

Stargate is the most popular tech choice in PvT now. Protoss then have the option to put down an early third Nexus (before 4:00) before the second and third Gateway. This then transition into the mid game macro phase. Terran can choose to be either passive until they can move out with Stim or go for some light harassment attacks. From Protoss’ perspective, there is little incentive to prioritise an Observer over other tech choices. An Oracle is much more valuable and versatile than an Observer, and it allows Protoss to dictate the flow of the game. The Oracle can be sent to Terran’s side of the map without having to worry about Widow Mine after the 4.0 patch. This creates a clear active versus passive role situation i the match up. The Cloak Banshee is an interesting disturbance to this one-sided early game.

Push out when there are two Tanks. Stop Tank production at three. Move to the 3-1-1 convergent point by putting down two more Barracks (then two more Refinery). Transition to the standard bio and Medivac composition. The two vods below are some examples of this build.

Cloak Banshee is the only viable option that Terran have that could force Protoss to have detection. When Ghost had Cloak by default, I was suggesting that it could fit this particular role. But Ghost becomes even less viable after the patch that requires a separate research for Cloak. The Cloak Banshee still has the flaws that I had discussed earlier, but it influences Protoss’ choices in ways that could be beneficial for Terran. First, Protoss would have to make more Oracles as that is the only detection option at the point of time, and the investment on Stargate units is an opportunity cost for other mid game tech options. Second, the Cloak Banshee forces Protoss to position the Oracles defensively to anticipate the attack, and this shifts the active versus passive role dynamics I mentioned earlier.

The screenshots (taken from the Maru vs. Patience game linked above) below illustrate these two points clearly. The first two images show Protoss continue to invest in the Stargate units and rally them to their base rather than Terran’s base. The third image shows the positioning of Protoss because of the knowledge that Terran tech to Cloak Banshee. 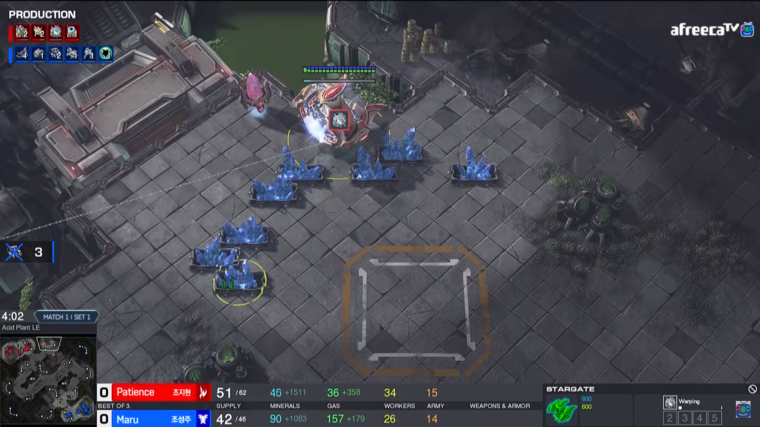 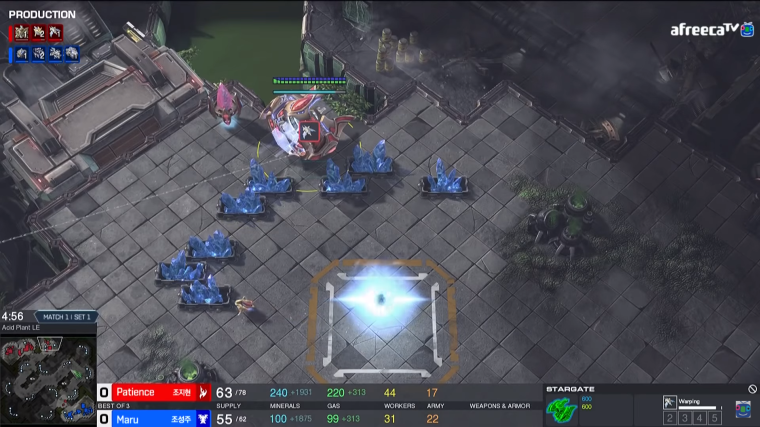 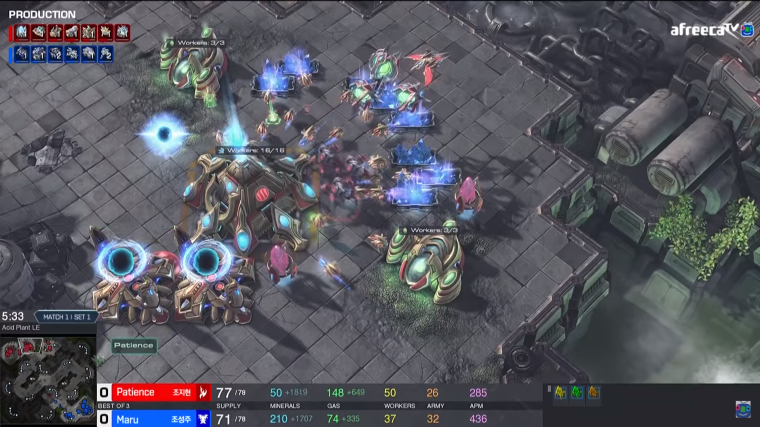 For quite some time, one of the reasons behind Terran’s struggle against Protoss is that Protoss can cut corners in the mid game transition. Protoss often get away with an early third Nexus, double Forge, and Twilight Council upgrade. This state could be attributed to two things. First, it is Terran’s lack of potential to deal damage in that time frame, and this is addressed by Blizzard in the recent patch to buff Marauders. The better Marauders provide more room for Terran to be aggressive in the mid game (watch ByuN’s recent TvP games in GSL – for example), and this directly makes it harder for Protoss to cut corners. The second reason is the respective roles that I mentioned earlier, whereby Terran’s default defensive stance allows Protoss to have the luxury to cut corners.

When you put these two reasons and the two benefits of Cloak Banshee I mentioned earlier together, it appears that Cloak Banshee is a well tailored metagame build. The Cloak Banshee forces Protoss to be cautious, and the constant Stargate production delays other investments. These factors then create an opportunity for Terran to make a timing attack.

The Cloak Banshee build usually follows up with a Marine and Siege Tank push. The best answer from Protoss against such 1-1-1 push is Immortal, whose attack range was buffed way back in Wings of Liberty to address the 1-1-1 push back then. The investment in the Stargate units delays the Robotic Facility, and this makes the push difficult to hold. The vod below demonstrates this well, whereby Protoss’ Robotic Facility is not even ready when the push hits the third Nexus. The Banshee also pulls the Protoss units away from the push by attacking the Probes in another mineral line. It is difficult for the remaining Protoss Gateway units to fight the push head on.

There are a few specific build order details worth discussing.

This build works better with 15 gas 16 Barracks Reaper expand than with 16 Barracks 16 gas Reaper expand. The notable difference is that the former puts down the Factory and Starport earlier, while the latter has an early Marine. Without going into the details, the benefits of having the Banshee out quicker outweigh the advantages of having the Marine.

Why does this build go for such unorthodox path to reach the 3-1-1 convergent point?

Fundamentally, Terran want to move out with Stim and Medivac with the 3-1-1 set up in TvP. It is best to be defensive with the bio units before the move out, because they are much more valuable when they have Stim and Medivac than when they are by themselves. However, this idea does not sync well with the Marine and Tank push of this build, because you essentially trade those units away before you have Stim. If you build the two Barracks before the third Command Centre to transition earlier, the bio army size is a lot smaller than other common builds by the time Stim is ready. It is hard to move out with that small army, and hence, Terran would have to be defensive during that period of time. This is a big bump to the usual power spike of Terran. Then, logically, since you want to sit back to delay the move out in mid game, you should delay the Barracks in favour of the earlier Command Centre.

Along the same line, Terran are forced to make more Tanks and Banshees after the push. Protoss have a good counter attack opportunity once they clean up the push, and Terran have to continue to make Tanks to defend. This defensive stance aligns well with the third Command Centre path. Further, you want to have a Reactor on the Starport to produce Medivacs for the Stim move out timing, and this suggests Terran have to transition out of Banshee production early to be in sync with the 3-1-1. This makes Terran turtle hard, and the advantage gained from the prior push is attenuated as a result. Therefore, the overarching strategy is more congruent with the third Command Centre first than with the two Barracks first.

The understanding of these details is important as it allows you to differentiate a real and a fake Banshee build. Let me use the vod below as an example, TY went for a 1-1-1 then added two more Barracks, while Trap went for a Stargate build. TY researched Cloak on the Starport but he did not get a Banshee. He later lifted up the Starport and “discarded the plan” to go Banshee. Artosis pointed out that TY made the mistake of supply blocking himself, so TY decided not to go for Cloak Banshee as it is delayed. In my opinion, the Cloak research is a fake that is intended to be scouted by the Oracle. This is because, TY delayed his Starport earlier in favour of a Cyclone, and he also put down the additional Barracks before the third Command Centre.

This mind game move implies that Cloak Banshee is a common option in the metagame. If Terran do not go for Cloak Banshee generally, Protoss are unlikely to bite the fake. Indeed, you can see such tricks in other games recently. In the vod below, TY started Cloak once he saw the Oracle would sneak in to scout the Starport behind his mineral line, but he was actually making Liberator instead.

A shout out to Kristian Punevski and Chris Cullins for being Code-A supporters on Patreon. Thank you very much. It helps to sustain the site.