This is not the usual TerranCraft type of content. I am going to rant a little about the skin (half serious).

After a long day of work yesterday (lots of procrastination with Starcraft vod), I met up with some strangers from a Pokemon Go discord channel for another Lugia raid. I was quite desperate to get a Lugia, because I had failed quite a number of times for the last three days. I felt more tense than doing a doom drop without a scan when I got into the capture screen.

AND I GOT IT AT LAST! So, I sent a screen shot to share my joy with my girlfriend (she had not caught one yet).

Her temperament is suitable for Starcraft. <3

I lost the game because I thought my opponent’s Banelings were Zerglings. You generally micro differently against a group of Zerglings without Banelings versus a group with Banelings. You form a concave then split the bio accordingly against Zerglings and Banelings. In contrast, you rather stutter step than split against just Zerglings. My group of Marines just disappeared against the Banelings, which I thought were Zerglings. The new skin made it extremely difficult to differentiate Zerglings and Banelings, and there was also a post on reddit this week regarding the same problem.

Let’s play a game called “count the number of Banelings”. How many Banelings can you see in the screenshot below? 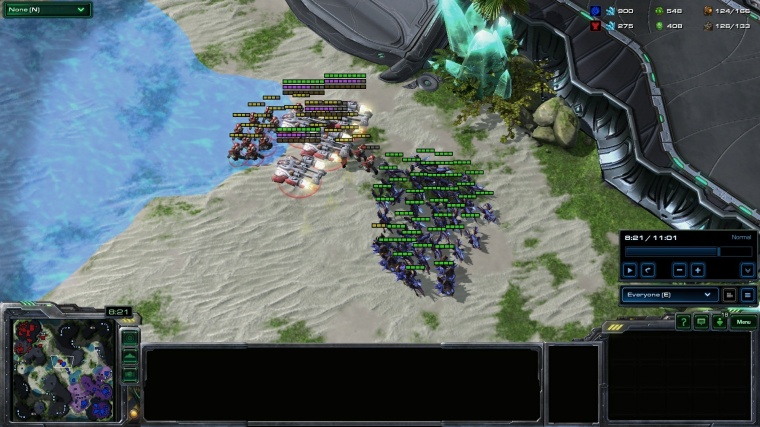 The issue is not about whether you get the number right or not. It is the fact that you are not 100% certain even when you look at a small group of them in an image tells you how hard it is to make a judgement in the game when everything is moving so quickly . Let’s play it one more time with the image below.

The answer is fifteen (see the unit selection in the image below). I still only counted fourteen even when I look at the image now with the knowledge that I know it is actually fifteen.

Zerglings and Banelings obviously look very different in their default skins (for reference). The yellow/green bubble of Baneling is very distinguishable, and that is not the case with the new skin. The image below is the same screenshots I have shown on top, but the colour is swapped over. The problem remains. 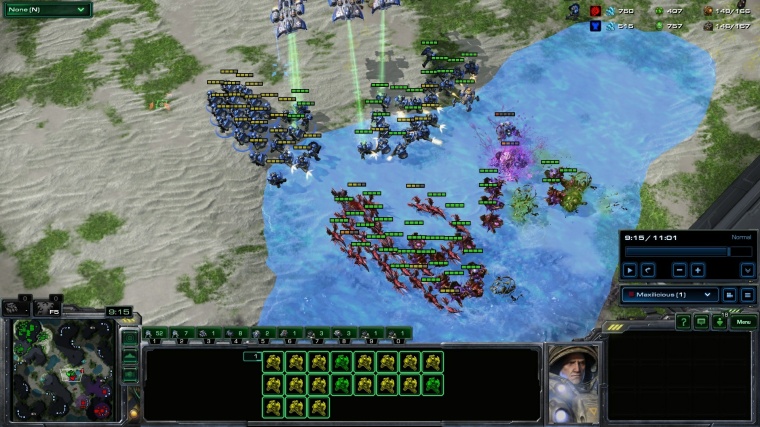 The skin has definitely affected the game play. You can even make an argument that Zerg have been buffed because of the difficulty to differentiate the units. That clearly is not the intention of the skin.

This is not the first time skin has direct influence over game play. The Zergling skin with enlarged wings give you an illusion that there are more Zerglings than there actually are. This was something that had been brought up four years ago. If you want to argue that the Zergling skin issue is subjective, then what about the Roach skin? The other Roach skin literally gives you an advantage over the default skin, because it does not show whether you have the burrow upgrade (discussed on reddit). Someone even told me that the skin used affects how visible a moving burrowed unit is (for reference), but I’m not sure if that is true.

Someone would bring up about the option to turn off the skin every few days on different forums. Here is another example two days ago. This is a serious issue.

Brownbear had made fifteen tweets about the skins issue recently.

Quick thread on skins and cosmetics in pro play in SC2 and CS:GO. 1/

I’m not going to link fifteen tweets, so here is what he wrote.

“Skins changing tournament results or otherwise dramatically impacting gameplay is unworkable in a competitive esport. Simultaneously, cosmetics (and an in-game economy) benefit esports. They justify more developer support and build player engagement. StarCraft in particular draws a huge amount of its professional prize pool from Blizzard, not third party tournament organizers. If skins, cosmetic items, etc retain and generate investment from Blizzard, that’s important to the ecosystem. It would also, presumably, provide more evidence that big new RTS games can still thrive and be profitable. Again, it’s not a good idea for cosmetics to dramatically impact gameplay. No one benefits from making a game worse. Issues like the recent baneling / changeling issue should be addressed as bugs. But the question isn’t “what skins can we make that don’t affect gameplay at all”? IMHO that’s not realistic. In CS:GO, the most popular cosmetics are also the flashiest and most eye-opening. The question is, what’s the right balance between appeal+potential impact vs. the dev investment+player engagement it generates? (And – what ways can we generate engagement without impacting gameplay?) “Blizzard should do whatever it takes to make money” will do a disservice to the game and ecosystem in the long-run, definitely. But “keep shoveling money at this game and make sure it doesn’t affect me in any way” is not realistic or sustainable either. Doing nothing has its own trade-offs, too. A balanced approach laser-focused on sustaining+growing the ecosystem is ideal.”

I decide not to purchase the War Chest. I know no one cares whether I buy the War Chest or not, but I still want to make a stand. I bought every skin available previously, because I love the game. I have no issue with skins that do not give a player an edge, and it is even better if the money can help the ecosystem. However, the fundamental quality of game play should never be compromised. I doubt Blizzard will implement an off-switch for the skins, but they must fix those problems that affect the game play directly.

There is no better way to promote the War Chest than by showing it in the WCS games, but skins are not allowed in every tournament that has WCS points (correct me if I’m wrong). This implies that skins do not have a place in the competitive scene. I am sure Blizzard are aware of the concern, but perhaps this is just not their priority.

It says a lot about /r/starcraft when Artosis' wife's news makes it to the top, but quality non-fluff contents don't get as much attention.