This is a guest article written by JoppE and Illerrre, and I have close to zero input. It is about betting in Starcraft, and I hope you read it with an open mind.

The global E-sports industry was according to Super Data Research valued closely to 900 million dollars in 2016. This is a 19% increase since the previous year, which shows that E-Sports is growing bigger and bigger for each year. This has not only led to a new business model for game developers, but for bookmakers as well. Over the past years there has been an increased interest in placing real money bets on various E-Sport games. In this article we’ll be covering the past, present and future of StarCraft 2 betting as well as how betting may impact the game.

The past – When E-Sports betting was mainly an underground industry

The history unfortunately tells us quite a rough story when it comes to betting on StarCraft. In 2009 there was a Korean match making scandal on StarCraft: Brood War involving the players sAviOr, YellOw[ArnC], UpMaGiC as well as few others. This brought a dark light over the betting industry in Korea as pro StarCraft players and the industry itself could not be trusted. As the scandal was being spread over the internet, this more or less became the first public appearance of StarCraft betting in the western world; not a pretty sight.

Fortunately the tides started turning with the release of StarCraft 2: Wings of Liberty, as well-established and highly regulated bookmakers in Europe started offering bets on the game. Not immediately, but as the competitive scene in StarCraft and other E-Sport games were getting increased attention and tournament prize pools getting higher, bookmakers started offering bets on several E-Sport games, including StarCraft 2.

The present – A healthy regulated market is starting to bloom

We currently live in very interesting times as E-Sports and E-Sports betting is growing faster than traditional sports, especially within the younger generation. It’s a highly technologically advanced world where youngsters these days aren’t playing as much football or basket as they used to. They prefer to sit in front of their computer, playing on their phone or being at a LAN party playing games. With E-Sports getting bigger, this is of course also giving birth to dreams of becoming a pro gamer and making a living out of that. All they need is a decent computer, console or phone with an internet connection. They don’t need to move anywhere or come in time for some practice that’s only being held every now and then. There’s always time for games and there’s always players to practice against.

Not only that, but today we’re seeing E-Sport games with tournament prize pools that are reaching higher amounts than many traditional sports. For instance, the Dota 2 championship “The International” that was played last year had a prize pool of more than 20 million dollars; stunning to say the least.

So where does StarCraft 2 stand in all of this? Well, in terms of total prize pools offered, StarCraft 2 is currently ranked as the 4th game according to eSports earnings, where Dota 2, League of Legends and CS:GO are ahead. StarCraft 2 is however the game that has had by far the most tournaments going down.

You could more or less say that the bookmakers have followed eSports earnings ranking when it comes to odds offered, which means that StarCraft 2 is the 4th most common game seen at the bookies.

In reality this translate to the majority of bookmakers offering bets on some of the most important StarCraft 2 matches. You will also find a couple of different markets to bet on, but not as many as for instance League of Legends which is a very popular choice to bet on among the E-sport games.

Even though Starcraft 2 may not be the most prioritized game among many bookmakers, we have along with the growing E-sport industry recently seen a new type of bookmakers. These bookmakers are purely into E-sports which means that they have put all their focus on covering matches and offering bets on E-sports and E-sports only. These bookmakers generally cover a lot more matches on StarCraft 2 than other bookmakers do. This is definitely a sign of a healthy regulated market starting to bloom.

The future – When a Zergling becomes an Ultralisk

The betting scene for StarCraft 2 has been growing as it seems to spark a new well needed light for the fans who enjoy the highest level of professional games. As an example of this, StarCraft 2 IEM Katowice had 27 total bets in one single day on the 3rd of March, which is nothing unusual for an event of this size. This along with Starcraft being the only RTS that have succeeded in producing reliable and well balanced matches (which is required for betting companies to offer odds on it) is an indication of a good future for the game in terms of betting.

Starcraft 2 actually has some similarities with chess. Even though chess will never reach a big audience it still has its core followers. It’s the same thing with Starcraft 2; the game will never die as long as it has its core audience, which are fans of RTS. What we see now is a settlement of a game finding its equilibrium and its true place within the E-Sports scene. Betting companies know what to expect from the game, how to predict matches and therefore what to offer. This is something that won’t change as long as StarCraft 2 is the only RTS with an “class One E-Sports status”.

As it’s becoming well-known that E-Sports is a multimillion dollar market, a lot of game developers are having this in mind when creating new games. This could of course be a threat to Starcraft 2 in terms of betting and the game itself, as if another RTS game was to be more successful not only would bookmakers be prone to prioritize bets for such a game (which is currently being done with for instance League of Legends), but Starcraft 2 players might also be prone to change game.

The demand for E-Sport games today is quite high and far from saturated, but to make a successful E-sport game is not easy and only a few developers find the balance needed for it. Blizzard for instance tried to compete with Dota 2 and League of Legends by creating Heroes of the Storm, which are all three MOBA games. Even though bets are indeed offered for Heroes of the Storm, it’s not that common among bookmakers and the game itself is far from as popular as the other two mentioned.

If all the puzzle pieces fit; enough popularity, being well balanced and having a predictable game result, there is good chance that the betting industry will offer odds on it. However, since we can’t see any games in development right now with a realistic shot to replace the real-time strategy king in its current state, we can safely assume that StarCraft 2 is here to stay for a very long time. 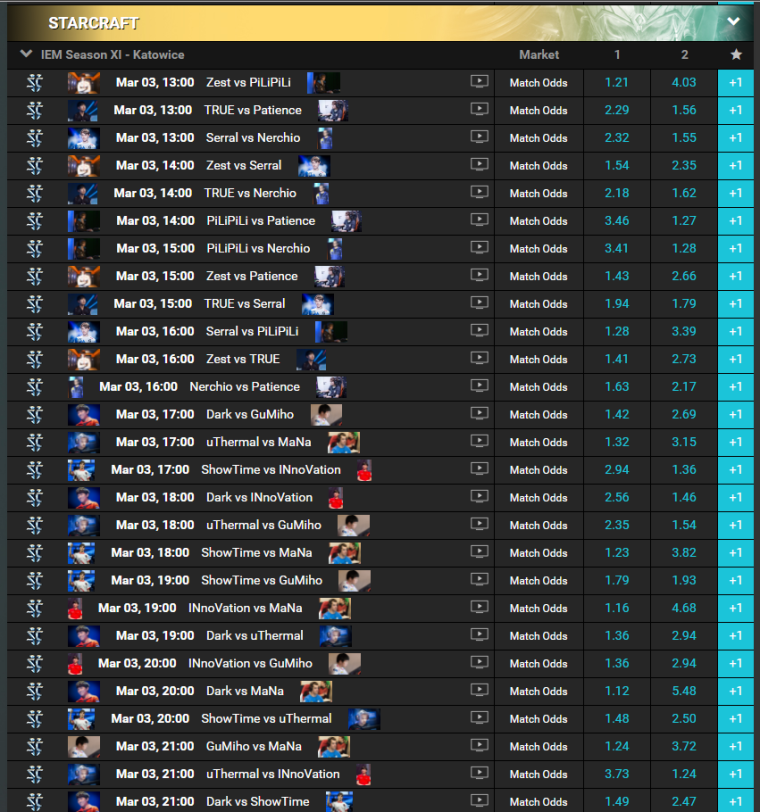 What impacts may betting have on Starcraft?

One must understand that betting on E-Sports is still in a very early phase, but as E-Sports itself is getting more and more recognition and the younger generation is growing up with high speed internet and high performance computer, laptops and phones in their hands instead of footballs, this is eventually set to explode. For those of you with no insight in the gambling industry, regular sports betting is according to statista a 700 – 1000 billion dollar industry. With the current growth of E-Sports betting it’s only a matter of time before those number can be translated over to E-Sports. Some of this is money will definitely go back to the community and to the players in one way or another. As in traditional sports, the bookmarkers are looking for exposure to reach its audience, which opens up for sponsorship opportunities for the teams. As we’re still in an early phase, this is still something that is quite rare, but we have started seeing it with some bookmakers. As an example we have the Nordic E-Sports team Alliance who just got sponsored by gg.bet, a bookmaker purely into eSports and nothing else.

This is a huge thing for teams outside of Korea, since it’s opening up opportunity to get sponsored by companies that are sitting on a huge pile of money and that share a common interest with the teams. This is a rare symbiotic cooperation which is quite unique between (e)sport teams and betting brands.

JoppE and Illerrre of ebetfinder.com are two hardcore Starcraft fans who’ve been playing the game back and forth since starcraft 1 beta. Nowadays they mostly enjoy the game from the side as spectators and has amped up their love for the game with some betting.

This is the first time I have posted a guest article. Just to be very clear, I have nothing to do with ebetfinder.com, and TerranCraft is not sponsored by them nor is endorsing them in anyway. They expressed their interesting in writing a guest article about betting, which is a topic that is hugely considered a taboo in the Starcraft scene due to match fixing scandals.

While I understand the stigma around it, I want to keep an open mind about the issue from a wider perspective. The mainstream sports cannot really distance themselves from betting, so it is only normal that eSports will follow that path as it grows. The fact that Starcraft is considered “bet-able”, it indirectly highlights its legitimacy and status in the eSports scene. I believe a basic understanding of how betting as a force can influence eSports is fundamental for an informed judgement about it.