As requested by some readers, I wanted to write a simple piece on scouting in TvP. This is not meant to a be all and end all guide, as it covers only the basics.

Let me start off with housekeeping. I know I have not posted for a month. I have received some messages asking whether I’m still writing, and the answer is yes. The reason for being so unusually inactive these few weeks is down to my poor health and busy schedule. I won’t go into details, but I can assure you that I take pride in being consistent with my work. I used to post 4 to 5 posts a month (basically one weekly on average), and I will try to keep it that way as much as possible.

The other reason for the delay is that, this post takes a long time to craft.

It is very difficult to write a good scouting guide for several reasons. First, the metagame is constantly shifting, so it is hard to write a cross-sectional piece based on longitudinal data.

Second, one can never be conclusive about scouting, as it is a matter of deducing. Thus, it is not meaningful to suggest things like, if you see this, it will definitely be this.

Third, and it is linked the second point, the economy of Legacy of the Void makes it harder to deduce away certain options. The task is actually more difficult than what I have done previously in Heart of the Swarm.

Fourth, the most challenging thing about a scouting article is how to present the information in a systematic order. It is a challenge that you will only understand if you attempt to write one.

In sum, it is crucial that you understand the limitation of this piece. I won’t discuss about the rationale behind certain things, and how to react to what you scouted. Also, it is never meant to be exhaustive, but it aims to provide a basic guide.

I welcome any feedback and suggestion to improve this, so please leave it at the comment section below.

It is uncommon for Protoss to go for an one base opening against Terran for a “standard” size map. I don’t have a precise definition on what is considered a standard size, but a good example of a “non-standard” size map is Dasan Station. A standard worker scout at 17 (can vary by +/- 1 supply based on map, metagame and preference) should allow you to gather information on the timing of the Nexus at the natural. This is the first important piece of information.

Check the number of gas geyser taken. If there is none taken, it is likely to be multiple proxy Gateways (the most extreme is four). Of course, it is possible that there are Nexus taken elsewhere, but I will keep this concise.

If there is a geyser taken, it is likely to be proxy two Gateways with Adept or/and Stalker.

First of all, it is plausible that the Nexus is built elsewhere, and you can tell by the timing of the second geyser. The vod shows Protoss taking a gold base instead of the natural base.

If Protoss did not expand, and there is only one geyser. It should be a mineral intensive early attack. I wouldn’t include Photon Cannon rush into this category, because Protoss will show their hand before you scout opponent’s base for confirmation. The most common option is a Pylon Overcharge with a few Gateway units, and that usually include an early Zealot (see Chronoboost on Gateway). A one geyser Pylon Overcharge usually means that Protoss will expand behind it. See vod below.

It is more common to see two geysers being taken if there is no expansion taken early on. Two geysers can broadly be categorised into three things: Pylon Overcharge attack, proxy tech or tech before expansion.

Pylon Overcharge with two geysers usually has a tech follow up, and it is usually Stargate (i.e., Oracle).

Proxy tech and tech before expansion are basically the same thing in terms of build order in general, but they differ in where you place the tech building. This can be deduced by counting the number of Pylon in the base, the second Pylon is usually the proxy Pylon. The first vod below is a proxy Robotics Facility into expansion, and the second vod below is a tech first with Robotics Facility in base into expansion.

Given that there can be a follow up attack or a delayed expansion variation for most of the above openings, it is important to scout the timing of the delayed Nexus if any. It is harder to pin point what timing the delayed Nexus should be placed, because the tech option and whether Protoss invest on other production (for example, Mothership Core) before expanding can affect the timing. Generally, it is around 2:30 to 3:00.

One Gateway expand is the most common opening, and it is as follow,

The Nexus is usually down by 1:20 to 1:25. I will not link any vod here, because it is THAT standard. The Nexus at the natural basically tells you that there is nothing unorthodox coming your way for a certain period of time, and the variations after that are the main focus of discussion. There are other comparable openings, like Nexus first and gasless one Gateway expand into two gas (see vod below).

The rest of the discussion below is based on this opening unless stated otherwise.

Whether Protoss make a Mothership Core when Cybernatics Core completes is an important piece of information. You can tell whether the Nexus is producing Mothership Core or Probe by looking at the animation (see image below). 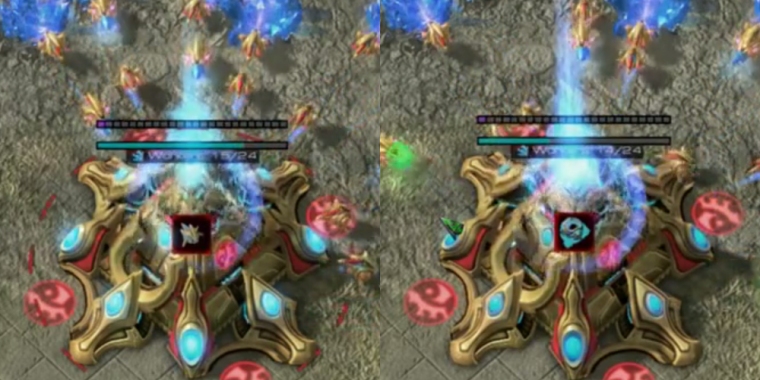 After expanding, Protoss will usually tech up, and there is a wide range of builds based on the tech path. I will only focus on the mainstream ones below, and of course, it is plausible that Protoss do not tech up and just put down multiple Gateways for a two base attack.

The key timing to look for the tech path selected by Protoss is around 2:30 to 3:00. A Reaper scout or a scan at this timing is crucial.

I know that Protoss can have other buildings for whichever build order is being used, for example, a Stargate or a Dark Shrine. Or some may favor earlier upgrade with a Forge, but the above buildings still are the core of the three base convergent point.

If the first tech building is a Stargate, it is extremely likely that the first unit produced from it is an Oracle. The timing of the Stargate and Oracle varies according to whether Protoss make the Mothership Core right after Cybernatics Core completes, as I have mentioned above. By skipping the Mothership Core, the Stargate is down by 2:10, and the first Oracle can reach Terran base by around 3:40 (see vod below).

There are many subsequent options. Compared to other first tech options, Stargate is arguably the most common choice to go straight into a quick third Nexus. As you can see from the vod above (Dear vs. GuMiho), the third Nexus can be down as early as 3:15. Other options are basically a matter of sequence to converge back to the three base convergent point I mentioned above. For example, you can put down two Gateways then a third Nexus (first vod below) or a Robotics Facility (second vod below).

The examples above are more mineral focused (either more Gateways or a third Nexus), and there are options that are relatively more tech focused. The vod below shows how Protoss put down the Robotics Facility before Gateways or Nexus by taking an earlier geyser at the natural. This allows Protoss to tech up quicker.

Most of the time, Twilight Council has the lowest priority after a Stargate opening when converging back to a three base convergent point. However, Protoss can still get the Twilight Council before the Robotics Facility, and they use Oracle and Phoenix defensively to indirectly replace Observers for the time being (see vod below).

Protoss can choose not converge to a three base convergent point, and go for a two base all-in by putting down multiple Gateway. In the vod below, Protoss have seven Gateways on two bases. A crucial detail about it is that the first Gateway unit produced is not an Adept, but a Stalker. The biggest difference between these two units at the early stage is that Adept is better at scouting and Stalker is better at denying opponent from scouting. Therefore, Adept is usually a better choice for a “standard” game, and Stalker is a better choice if you plan to hide your build like a two base all-in.

One Gateway expand into Robotics Facility then Twilight Council is arguably the most standard macro build in this match up, subsequently the third Nexus and two Gateways are placed to complete the three base convergent point. The Robotics Facility will prioritise producing Observers, while the Blink is being researched on the Twilight Council. This is considered a defensive macro style (see vod below).

The timing of the third base varies based on Terran’s build. The vod above shows Protoss chose to get more units to defend before getting a third Nexus. Protoss can also choose to favor tech by delaying the third Nexus (see vod below). The difference between this tech favored path and a two base all-in is the geyser at the natural, whereby the geyser at the natural are taken if Protoss go for tech. Thus, a delayed third Nexus does not necessarily mean that it is a two base attack.

Apart from the common Twilight Council follow up, there are other variations stem down from a Robotics Facility tech path. A common one is the early Warp Prism oriented control variation that put down the two additional Gateway first, and this allows Protoss to apply early pressure to pin Terran at home while macroing at home (see the first two vods below). On top of that, Protoss can decide how much they want to commit with additional warp in based on the situation, and this is done by further delaying the third Nexus and Twilight Council (see the third vod below).

The other non-Twilight Council follow up is a Disruptor drop (see vod below).

Similar to the Stargate tech path above, Protoss can add multiple Gateway to do a two base all-in (see vod below).

It is relatively uncommon to go for Twilight Council as the first tech choice, and choose to converge to a three base convergent point in a safe manner. An early Twilight Council usually means it is an “upgrade” attack with either Blink or Resonating Glaives, and the Robotics Facility is the second tech for the Warp Prism warp in for the attack.

Resonating Glaives is a lot more common, because it is simply stronger than Blink for a two base all-in. The mainstream build is a six or seven Gateway Adept with Resonating Glaives all-in that hits at around 5:00 (see the first two vod below).

It can also be a Dark Templar build. In the third vod below, Protoss actually faked that he was researching Resonating Glaives (cancel later), while he actually was hiding a Dark Shrine. The Dark Templar can walk in at around 4:30 depending on proxy Pylon location.

Phase 1.5: Place Scv next to main Nexus after Cybernatics Core is done to see whether Mothership Core is made.