I’m sure most, if not all, Terran and Zerg players know about this double Medivac 5:00 stim timing build by now. This post summaries the key things from my previous posts (part 1, part 2 and part 3) and consolidates some of the common metagame follow ups.

I want to briefly go through the basics as I want this post to be an independent piece that others can link to when this topic is discussed.

Although many say this build does not work any more, I believe a better description is that it is just not as effective as before. Nevertheless, it remains as one of the main metagame builds, as Terran do not have better build that does what it does in that time frame.

Terran made some interesting adjustments to the follow up of this build, and some have been misunderstood. I will discuss them below.

It is a 2-1-1 build that aims to load up 16 Marines into two Medivacs at around 4:45, and commence the attack with Stim by 5:00. This is not an all-in, but it is simply a build that lines up an attack early on. The third Hatchery is usually the attack location.

The goal is to deal as much damage as possible with the high damage output with 16 Stim Marines and two Medivacs. It is extremely hard to deal with for the Zerg if they are not prepared, and it could be game ending. The mobility of the pick up and unload from the Medivacs makes it difficult for Zerg to pick a good fight in general.

However, Zerg have improved and they have several reactions to counter this build.

There are three general paths in Zerg’s reaction, and you can easily identify them with the Reaper. The Reaper opening is another strength of this build.

From Zerg’s perspective, they will scout this build by sending an Overlord with speed into Terran’s main. Additionally, they will run a few Zerglings to the natural of Terran to look at the number of Marines.

By early, I refer to timings that hit before 4:40, or basically before you hit your timing. There is a range of Zerg all-ins or something along that line early on. For example, two-base Roach and Baneling burst.

This option is relatively rare, because it is generally not that effective. The Marines should provide enough to hold most of the all-ins if Terran can scout the incoming attack. The rest is a matter of positioning and reacting by placing necessary Bunkers.

In fact, it is hard to find SSL, GSL and SPL vods on such choice in August (last 30 days).

You can argue that these early attacks essentially ignore Terran’s build, so it’s not a reaction.

Zerg can choose to counter attack while Terran execute the build order by moving out with two Medivacs of units. It is a calculated reaction specifically against this build specifically. The idea is to counter attack when Terran have nothing at base to defend against it. Thus, the timing and execution required to get that right are very demanding.

There are many ways Zerg can counter attack, and the idea is simply get a group of Zerglings into Terran’s base. This can be done by simply attempting a run-by, which usually won’t work well because of the wall off (i.e., map dependent). Thus, other options like Baneling burst (only need enough to destroy the wall) with Zerglings, and Overlord drop with Zerglings are more popular.

Zerg have tried different ways to hold the attack at 5:00, and the mineral heavy style with Queens and Zerglings is arguably the most successful one.

Once Zerg have identified the build, they will make Zerglings instead of Drones for several “production rounds” before the timing. At the same time, like any macro Zerg style, there is non-stop Queen production. The target is to have as many Queens as possible (usually seven at that timing on three bases) and more than 20 Zerglings (see the unit tab on the top left in the image below). 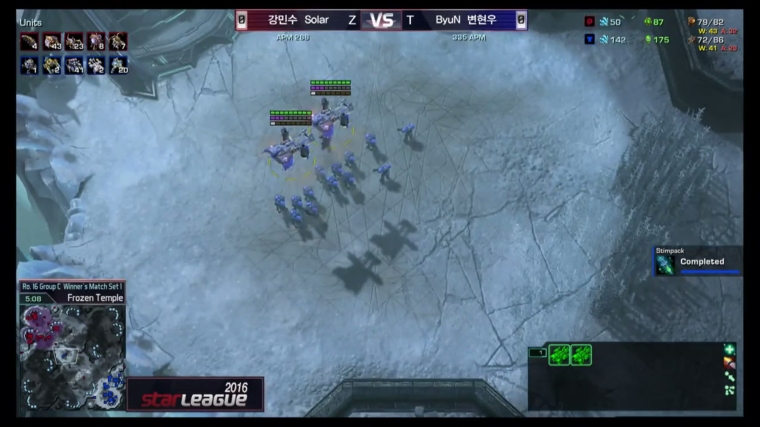 There are some interesting discussions and heated debates on forums about the follow up options of this build order. I think some misunderstood what some of the main stream follow up options are, and their pros and cons. While it is not wrong to suggest that it is a matter of resource shuffling, there are important decisions made behind why certain options are favored in certain situations.

Before I discuss about the follow up options, I want to take a step back and point out that a crucial and often ignored decision is made before the follow up options even come into consideration. Broadly, one has to make a decision to either execute the build order with the planned 5:00 timing, or to alter and even give up the initial attack.

As mentioned earlier, this build itself is not an all-in, so you want to transit into a macro game behind the attack. According to the logic of convergent points, you want to converge to a three base economy macro set up, or a two base 5-1-1 all-in setup. Certain follow up options fit better for one and not the other.

The next decision is, do you follow up with another timing, if so when and what? When this build was just getting popular, there was no clear follow up timing. Nowadays, it is common to have a planned follow up timing, and it is just a matter of whether the situation allows you to continue with it.

The build order continues from the basic one listed above.

This hits at around 6:30. It is a straightforward follow up timing with two Tanks, four Medivacs and a bunch of Marines. This works well on maps that allow you to place the Tanks in a sweet spot for the timing.

Since this follow up timing hits relatively early, it is particularly strong against Zerg who want to transit to a different mid game composition after they have sort of held the initial attack of this build.

The build order above shows a three base economy convergent point, but it can also be used for a 5-1-1 two base set up.

This build order does not directly continue from the basic build order at the top, but it continues from when Factory is started.

The timing hits at around 6:45. It is a little bit similar to the more common 6:30 two Tank timing, but this delays the third Command Centre for an earlier +1 attack upgrade. In the vod below, ByuN did not execute it well, because the upgrade timing and the attack did not align well. If he attacked with the +1 attack upgrade done, it would hit with three Tanks, four Medivacs and Marines at around 6:45.

In fact, I argue that this works better with a two base 5-1-1 convergent point, because of the single Engineering Bay upgrade. It is conventional to have two upgrade buildings for macro set up, and only one for two base set up. It is not a strict rule, but the resource is better spent this way in general. A good way to follow up from ByuN’s build order is to replace the third Command Centre with three more Barracks, and continue with a +1 armor upgrade. Then, attack with everything you have with a 5-1-1 two base convergent point when the +1 armor upgrade is done.

The below vod shows how Maru does not have a clear follow up timing, but converges to a 5-1-1 two base set up and keeps attacking. He only uses one Engineering Bay for upgrade.

This build order does not directly continue from the basic build order at the top, but it continues from when Factory is started.

The timing hits at around 6:00 with four Medivacs, two Tanks and Marines. It looks like the two Tank follow up, but this hits 30 second earlier. This variation skips the Widow Mine and put down an earlier third Refinery.

In the vod below, INnoVation altered the initial attack, and I will discuss it later. You can still commit to the attack, and do this follow up.

The build order continues from the basic one listed at the top.

There is nothing fanciful about the follow up, but it is rather counter intuitive if you know more about convergent points. In general, you put down the third Command Centre before the two Engineering Bay, but it works better the other way round in this build. This is because you will bank up gas with the two Refineries for a mineral intensive build order, so you want to spend the gas somewhere. Thus, it is a nice way to accommodate this limitation by prioritising the two Engineering Bay and spend the gas on the +1/+1 upgrade.

There is no clear follow up timing for this, but it is conventional to attack when +1/+1 completes or when +2/+2 completes. This is usually a better choice when the map does not allow you to be effective with the already discussed follow up timings, for example, a long distance map (see vod below). I like ByuN’s approach to do multi-pronged hit and run attacks before commit to a frontal attack when +2/+2 is done.

The reason you want to alter the initial attack is you believe Zerg will counter attack. Hence, you are forced to not commit to the initial 5:00 timing with two Medivacs, as you will end up losing the game. Usually, Terran will send out two empty Medivacs to fake that they are executing the planned timing, and have units in base to anticipate the counter attack.

Since the 2-1-1 investment with Stim and two Medivacs is huge, you want to attack to get the best value out of it. Thus, when Terran give up on the initial timing, they choose to hit a follow up timing and not go with the two Engineering Bay variation. In the below vod, INnoVation used the two Tank and Combat Shield timing, while Maru continued with his 5-1-1 all-in set up without a clear timing like I have mentioned earlier.

Recently, INnoVation showed a clean response against a counter attack that addressed the dilemma of investment and defending. At 3:35 in-game time in the vod below, INnoVation spotted an abnormal number of Zerglings moving across the map, so he was anticipating a potential counter attack. He only loaded up one Medivac of Marines to execute the attack, and leave the rest in base to defend. This allows you to get value with the investment for the Medivac and Stim, but also to defend a counter attack if there is one. Similarly, he chose a follow up attacking timing, since he altered his initial attack.

Although the build is less effective now, it should still remain as a metagame choice. As I have discussed, there is more depth to the follow ups than one can take at the face value, so the debate on “what the follow up is” should be “which follow up is better for the situation”.

There are some minor signs that Terran players are mixing the build orders up by using some Hellion opening variations, and I may discuss them in the future.