One barrack expand in TvP is the most commonly used build now. Although there are different variations (e.g. Bomber’s delay refinery build), they still generally converge back to three barracks, one starport and one engineering bay by 9:30. By 10:00, Terran should be outside of the Protoss’s natural with marines, marauders and two medivacs. However, this timing is so typical that both Terran and Protoss know what to expect from each other. Then, what is the objective of Terran at this time frame?

In the 10:00 – 12:00 time frame, Terran has the map control and is the aggressor. At the same time, there is no way Terran can just stim and A move at the natural. Protoss will just use force field accordingly to turn to battle around. The first instinct is to drop in the main since Protoss park the units at the natural. Indeed, this worked really well way back, whereby Terran just pull the Protoss apart with good drop and micro. But it does not work anymore.

In the current metagame, Protoss will position three to five stalkers in the main to anticipate the drop. At the same time, sentries, zealots and immortals/colossus are stationed at the natural. Even MarineKing and Polt, who are two of the best TvP players in the world, stop attempting to drop at this time frame unless they are sure that the Protoss is out of positioning.

The frustrating fact for Terran is that, despite having the army advantage, no damage can be done at that time frame. Terran cannot exactly just sit back as the momentum will swing back to the Protoss when colossus count reaches three or four. After studying quite a number of games, I found that Polt’s play displays a clear objective in the 10:00 – 12:00 time frame. I will use his match against PartinG in GSL season 5 RO16 as the example. Polt did a one barrack expand in Daybreak against PartinG. Although he proxy the one barrack, the game quickly turned into a typical TvP. Thus, it is still highly relevant.

For clarification purposes, the whole post is based on the following assumptions:

– Terran has the army advantage, and map control.
– Terran is the aggressor and Protoss is the defender.
– Terran cannot make a direct attack from the natural due to force field.
– Terran cannot do a drop because of the positioning of the stalkers.

Polt’s answer is simply to play standard. That is, continue to get upgrades, and get a third. Build two more barracks to make it five etc. The one thing that he constantly does is not to attack, but to delay and deny the third base of Protoss.

First of all, stay mobile and move around the skirt of Protoss’s natural and third (as shown in the image below). 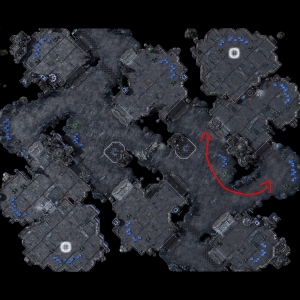 As noted earlier, the objective is to delay the third. Polt always has a marine at the third when he is moving his army around. This allows him to know if Protoss is trying to expand. If Protoss does not even try to send a probe to the third, or try to clear away the marine, then Protoss may do a two bases all in. A scan in Protoss’s main should be helpful when this happens. 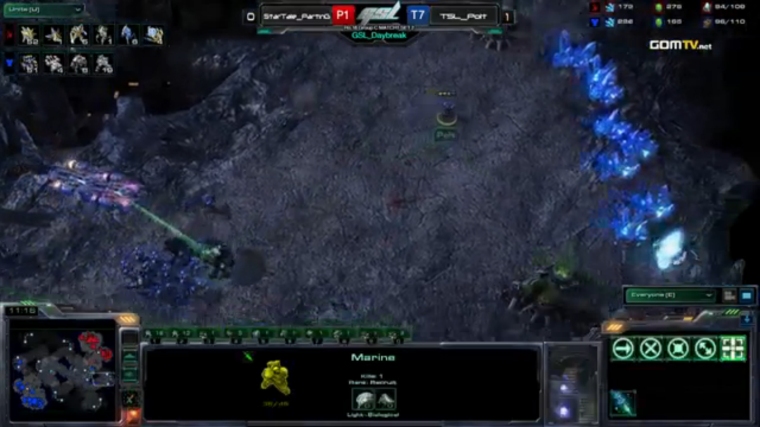 If Protoss try to get a third and the marine will be killed. When that happens, move the army to the third and kill the zealot/stalker, then place a marine there again. Deny the third, if it is building. Remember, the objective is the delay the third. 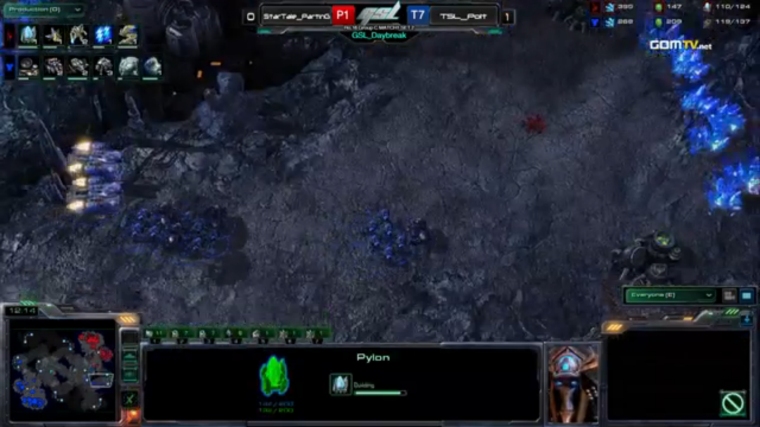 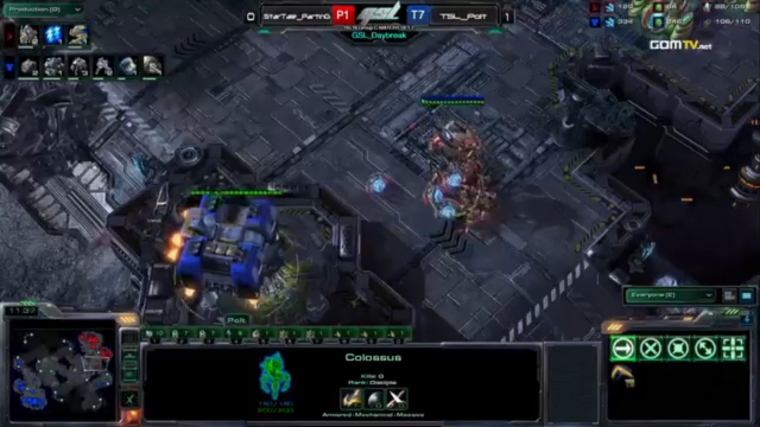 Protoss would be forced to move his army to the third in order to secure the location. It might be appealing and intuitive to drop in the main when the Protoss army is in the third. Subsequently, stim another group of units to deny the third when Protoss army moves back to the main to defend the main. Good Protoss players will not allow that to happen as they will always have units well positioned in the main base to anticipate the drop. 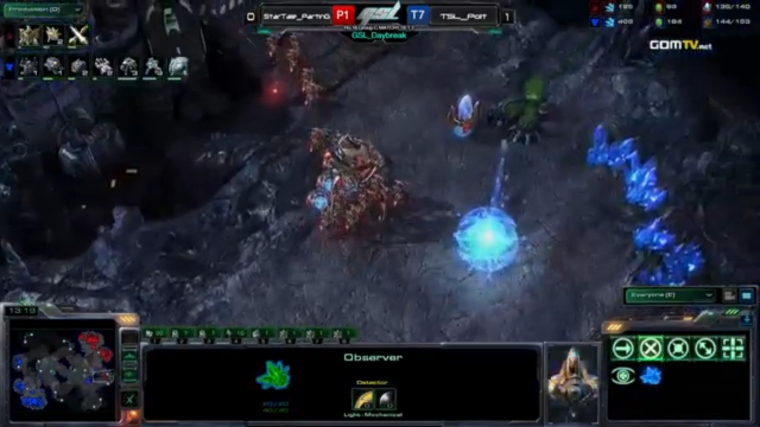 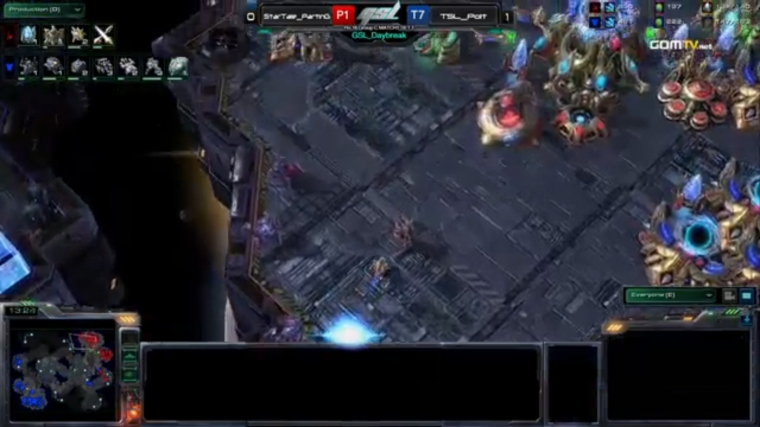 In the game, Polt was constantly moving around and tried to pull PartinG out of position. When he did, he quickly moved to the third and deny it. While Polt was delaying and denying the third, he had his third mining all along. The supply difference right after Polt deny the third was around 40. Instead of trying to do a risky drop and attack the third at the same time, Polt’s play is much safer and perhaps equally or more effective. 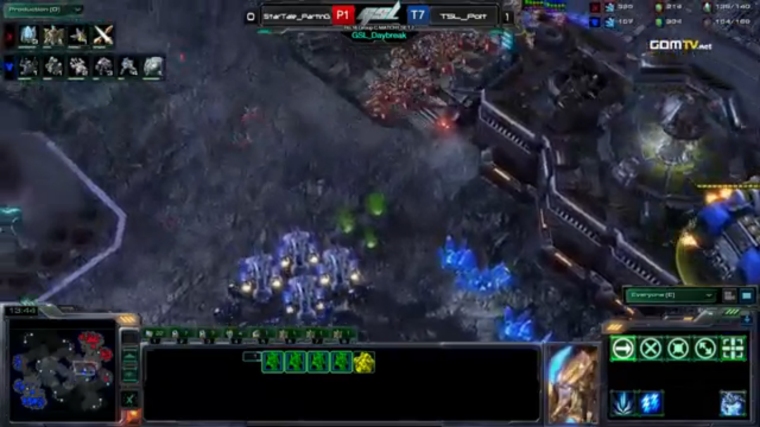 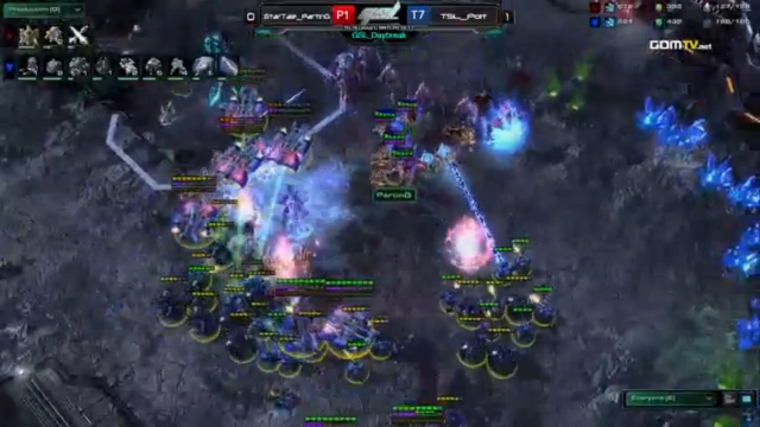 Eventually, Polt just had more and took the game.

In sum, denying and delaying the third is an alternative way to make use of the army advantage at that time frame.