Recently, I have been doing research to improve my TvP. TaeJa’s unique gas first build caught my attention.

In general, gas before barracks build is rare in TvP.

Terran cannot prevent opponent from scouting a 12 gas/13 barracks build in a two player map. Thus, Protoss can react accordingly and get an early robotic facility for Observer against Widow Mine and Banshee.  Furthermore, it is hard to deal damage against Protoss early on due to Mothership Core. Subsequently, Terran has to play from behind economically.

The build goes for an early Widow Mine and Marine drop.

I have to cite FanTaSy vs. First in WCS Korea (OSL) Ro16 on Whirlwind as the first televised game for this build (to the best of my knowledge). Although the build is the same, the approach is different.

FanTaSy’s approach is relatively typical. He drops the units at the mineral lines for economical damage. It is important to note that FanTaSy did this build before the Hellbat nerf. In line with the Widow Mine drop, he followed up with Hellbat drops.

On the other hand, TaeJa does not focus on economical damage, but simply try to deal damage in general.

Drop with Widow Mine and Marine. Hellions move in to the Protoss base accordingly.

Units at this point

Shape up to a standard game subsequently

This drop involves only one Widow Mine instead of two, as a result there are two more Marines in the Medivac. 6x Marine + 1x Widow Mine are stronger than 4x Marine + 2x Widow Mine for this opening. I will explain why.

TaeJa does not drop at the mineral line, but on top of the ramp between the main and the natural. This is the key difference between TaeJa and FanTaSy. It is extremely hard for Protoss to engage effectively at the ramp with that single Widow Mine. At this point of time, Protoss has around three units including Mothership Core (mixture of Stalker or/and Zealot). They cannot win the the fight without photon overcharge.

With the Terran units positioned in between two bases, a photon overcharge on either nexus will not hit the units. If Protoss engages there, the Widow Mine will be take out a Stalker, or Mothership Core (target fire with Marine). With six Marines, two Hellions and a Medivac, the game could be over.

Alicia was calm enough to pull Probe in attempt to trigger the Widow Mine in his game against TaeJa (ASUS ROG game 1). The Hellions and Marines zoned the Probes out from the Widow Mine and killing them in the process. The Widow Mine is meant to be a threat, and not a damage dealer. Hence, it is fine for it not to activate. If it does activate, it should not be targeted at a worker. This explains why a second Widow Mine does not add much to this attack. Instead of a second Widow Mine, this build has two Hellions and two additional Marines. It is much more stronger.

Protoss is forced to activate photon overcharge nevertheless. Move the units to the nexus that does not have photon overcharge and continue to deal damage (TaeJa vs. MacSed: WCS NA game 4). The damage dealt could be more effective than dropping at the mineral line. 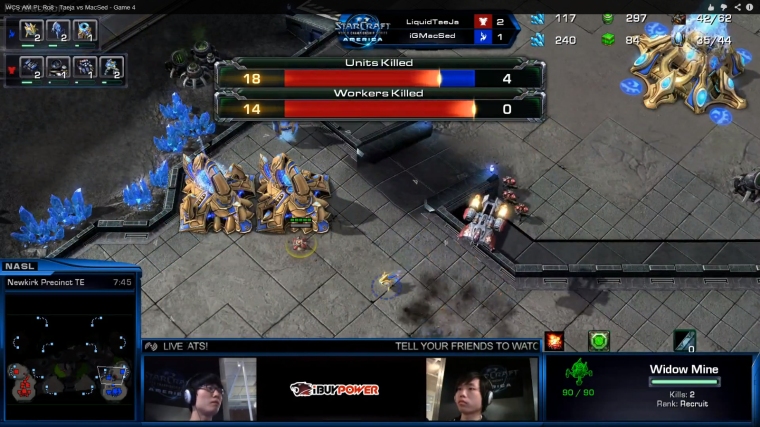 TaeJa tried to adapt this approach to a 15 gas build against Alicia in game 2, but it is relatively ineffective.

Interesting, for both TaeJa’s games that I mentioned, the opponent did not manage or choose to scout TaeJa’s opening. I wonder how Protoss would react differently if the gas first opening is scouted.