The prize distribution for World Championship Series 2013 has been announced by Blizzard.

Clearly, the prize distribution for GSL Season 2 (WCS Korea) will be different from Season 1. The amount has decreased for the Korea league, albeit the overall prize has been increased to $1.6 million. This is because the prize pool has to be equally distributed among the three regions. 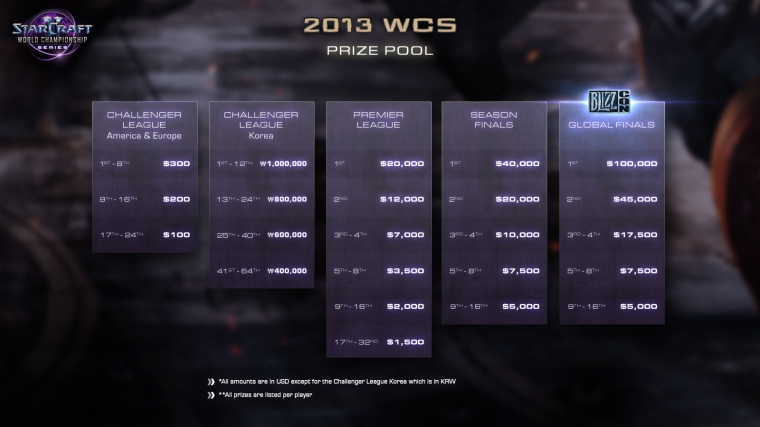 While the fans are concerned about the prestige of GSL and OSL, the Korean pros are worried about the amount they are going to take home. On paper, the champion of WCS Korean takes home less than half of what the last GSL champion. That is indeed a huge concern for the players.

Here is a quick comparison between the prize distribution of GSL Season 1 and WCS Korea.

The winner of WCS Korea will proceed to play in the Season Finals, which will give them at least $5000. However, that alone doesn’t quite balance out the amount lost for the upcoming GSL champion, as the amount is only 53% of last season’s prize money. In order to earn as much as the previous GSL winner, the WCS Korea champion has to be in the final of the Season Finals which earns him at least another $20000. If he takes second place, which takes his total prize amount to $40000. By winning one WCS Korea (1500 points) and being the runner-up for a Season Finals (2000 points), one has certainly secured his place in the Global Finals as Blizzcon. Assuming he earns the minimum amount at the Global Finals ($5000), his total earning will then be more or less equal to the GSL champion in Season 1.

There is one underlying assumption in the above scenario. That is, WCS Korea winner only wins the Regional League once. If he wins it multiple times, the Global Finals earning has to be divided accordingly to balance his earning per season. I doubt any player is dominating enough to win the WCS Korea back to back.  Nevertheless, the prize earned per GSL has certainly decreased.

It is important to bring up the fact that the WCS regional champion will almost certainly be at the Global Finals. Let’s assume the worst, after he earns 1500 points from the Premier League. He will still earn the minimum 500 points from the Season Finals, which makes it a total of 2000 points. In the next season, he gets knocked out of the Premier League in Ro32, and that earns him 100 points. Then, he loses in Ro64 in Challenger League and does not manage to qualify for the third season. Altogether he has earned 2100, which might not be enough to take him to the Global Finals given the point structure.

I am still waiting for the Premier League name list for America and Europe leagues to be confirmed after the qualifiers. So that I can make a post about the race distribution of WCS Premier League.