The Adept Phoenix composition has been very successful recently in GSL and IEM, and it is extremely popular now. I will discuss what this build does, and how to play against it.

There are two mainstream macro Protoss builds in the TvP match up now. One is two-base Colossus, and the other is Adept Phoenix early third Nexus. The former is arguably an adaptation of the conventional Protoss build, while the latter is an anti-meta build. About two months ago, based on the professional games played, I suggested that we were on the verge of a metagame shift. In that post, I mentioned that the ball was in Protoss’ side of the court to adapt to the metagame, and this Adept Phoenix build appears to be the answer. I strongly recommend you to read that linked post to understand what exactly this build aims to counter.

This is a standard one Gateway expand into Stargate with an early Mothership Core, Protoss then put down a third Nexus. Subsequently, there will be constant Phoenix production from the Stargate, and two more Gateways will be placed as Protoss converge to the Adept Phoenix composition. Twilight Council and Forge will be needed for the Resonating Glaives and +1 attack upgrades respectively. More Gateways are then added along with a Robotic Facility. The vod below shows the core of the build.

I think there is a misconception on the goal of this build, and that leads to Terran playing into the hands of Protoss. Adept Phoenix is a control-oriented defensive mid game composition. In other words, Protoss want you to attack them in the mid game, which is something that every Terran player does in TvP since Wings of Liberty. Generally, Terran have this power spike when the Medivacs and Stim are available for the bio, and this is when Terran move out on the map to be proactive. The mid game Siege Tank push that we have seen for majority of 2016 is essentially a variation of this fundamental understanding. Thus, Terran usually play the attacker role in the mid game match up, while Protoss try to turtle up for a deathball. The goal of this Adept Phoenix build does not diverge too far from this overarching framework, but it emphasizes more on map control.

This build is designed to counter the standard 3-1-1 or 2-1-1 TvP builds (refer to above links) that usually consist of a Widow Mine drop and a subsequent push after getting Stim. The Oracle provides good scouting information about whether a Widow Mine drop is coming, and the Phoenix is good against drop. The Adept and Phoenix composition is effective against the subsequent Terran push. The vod above shows how this build interacts against a typical Terran TvP build (except that Stats “randomly” lost his first Oracle). The below vod is another example that shows how it works out against the standard push.

In the above vod, INnoVation opted for Widow Mine instead of Siege Tank, and that works better against Adept Phoenix. The usual push timing is at 6:45~7:00, and the Resonating Glaives and +1 attack upgrades complete at the same time. Along with a production from a total number of eight Gateway, Protoss have a good set up against the Terran push. Both INnoVation and Stats were using the same builds in the vod below, and INnoVation executed his attack slightly better by hitting at a slightly earlier timing when the Protoss upgrades were not ready. Stats just fell back on the Pylon Overcharge to buy time for the upgrade, and then forced an engagement in his favor. Stats also fully utilised the mobility of this composition to defend against INnoVation’s drop in his natural base during the engagement. In sum, this build lines up its own power spike to counter against Terran’s timing well.

The vods I linked above have shown how the build interacts with the standard build, and also how effective it is to counter the drop and the subsequent push. The vods below are other examples of how this build works well against delayed push with Liberators, and also other variations of this build. For example, herO picked air attack upgrade instead of ground attack, and Zest skipped the Robotic Facility. In my opinion, Stats’ version is the best, and it transitions better than other variations.

First of all, you need to figure out whether you are playing against this build. A Stargate opening does not necessarily mean it is this build, but a Stargate with a quick third Nexus is probably enough to assume it is this build. The point is that this is the best follow up after a quick third with Stargate opening, and it is not bad to play against a Protoss that does another build based on the current metagame understanding.

I will start off broadly to make recommendation at a strategic level. Then, I will go into other more specific adjustments.

Let me restate this. Adept Phoenix is a control-oriented defensive mid game composition that counters the typical TvP build. Strategically, I don’t think it is a good idea to play out the attacker role as usual in the mid game. I think a more passive mid game approach may be more suitable, so one should macro up on three bases and wait for +2/+2. Adept Phoenix composition is strong when the Adepts can shade on top of your bio in the middle of the map. The Widow Mines will do splash damage to the bio, while the Phoenix came in to reinforce once the battle commences. However, this composition is weak to initiate an attack to siege a base with defensive set up with Missile Turrets.

In the two vods below, TY did not commit to attack in the mid game, even though he moved some units around the map. It is normal to be active on the map with bio as you still want to have information about opponent’s positioning and composition, but you do not try to attack their bases. You can think of them as your Phoenix.

In case you are thinking about mass dropping in mid game to pull opponent out of position, the evidence has suggested that the odds is against you. Of course, it may work out in some maps, but it is still too risky. See what happens when INnoVation attempted to drop in the mid game in the vod below.

As discussed, the Adept and Phoenix trade so well against the usual mid game push that it is not a good idea to carry them out. I think the first Widow Mine drop is also debatable, as it usually achieves little. I understand that it is tempting to attack when opponent is taking an early third, but the timing of the current mainstream TvP builds is hard countered by Adept Phoenix. Thus, you either attack earlier at a time that Protoss do not have the pieces ready, or you take your third earlier as well.

If you attack early, you either plan it with your build order, or you make adjustment to the standard build. A planned build order is a build that you know is going to work well statistically against the current metagame, and it is not an in-game reactive adjustment. In my opinion, the Cyclone Combat Shield timing is the best build order counter against the Adept Phoenix build, and it is very unorthodox. In the vod below, TY attacked with four Cyclones and a bunch of Marines with Combat Shield at around 5:15. I know that Showtime did not take an early third in the vod below, but I just want to show what the build is and the timing it hits. When you compare what Protoss have with the current standard Adept Phoenix build at that timing based on the vods above, I believe the battle is in Terran favor.

If you play standard against this build, you can make adjustments to the build order. Like I have said, the Widow Mine drop is debatable, and TY has shown that the third Nexus is a better attacking target. In the two vods below, he sneaked a Bunker at the third Nexus, and used the units that were meant for the drop to attack there. Clearly, this option is affected by the map, but the general idea is good.

If you have been a reader of this blog for some time, you will know that 3-1-1 and 5-1-1 are the main convergent points. In TvP, the three Barracks add-ons in 3-1-1 are usually two Tech Labs and one Reactor, and the five Barracks add-ons in 5-1-1 are usually three Tech Labs and two Reactors. Given that you want to replace Marauders with Marines, it is better to have one Tech Lab and two Reactors for 3-1-1.

As shown in the two images below, INnoVation made only Marines (zero Marauders) for the usual push with a 3-1-1 that is consisted of two Tech Labs and one Reactor. The second Tech Lab allows you to research Combat Shield for the timing. However, in line with the strategic thinking that you do not make a mid game push like that, it is perhaps better to simply delay the Combat Shield for more Marines with two Reactors. 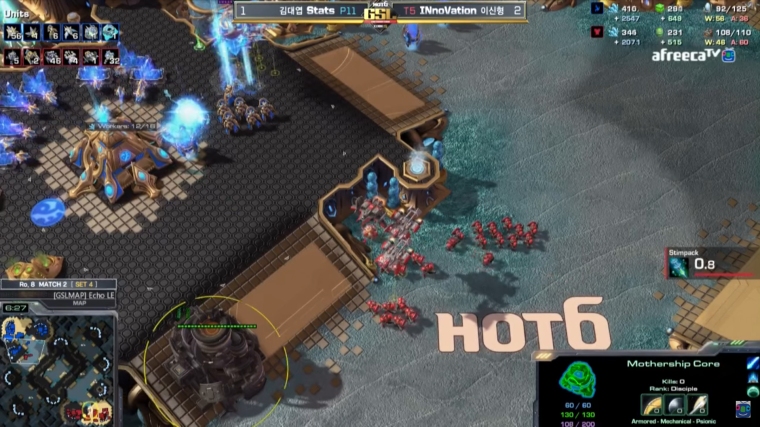 There are two reasons why three Tech Labs and two Reactors are still better. The strategy to be passive in mid game (and take it to the late game) fits well with getting Ghosts in the composition. I know EMP works well against any Protoss unit, but Adept will group up when they try to shade on top of your bio. This basically counters Protoss’ intention to shade into a battle to trade well. The other reason is that Protoss will slowly transition out of Adept and Phoenix for the standard composition with Colossus and so on, the usual 5-1-1 set up allows you to mix in Marauders at the same time.

Some have asked me about the effect of the Widow Mine nerf in the newest patch, and whether Terran should still make Widow Mine against Adept Phoenix or even Protoss in general. My answer is simple: Widow Mine is still the best support unit against Adept even after the nerf.

Adept Phoenix is a control-oriented defensive mid game composition that counters the typical TvP build. It is not a good idea to make the usual mid game pushes, as Protoss will trade well against that. A good way to play against the build is to be more passive in the mid game, and focus on the late game.