Flash played several TvP games in recent tournaments. He won PartinG in Proleague Grand Final, Dear, Classic, herO and Pigbaby in the IEM Toronto qualifier. He made some interesting minor changes on top of the standard TvP play.

Disclaimer: I am no Flash, and I just try to make sense out of his play.

Flash always goes for a 12/12 Reaper expand opening, except occasional 14CC. I won’t discuss about how he plays out the standard game, but put the emphasis on the small differences he did and decisions he took.

Just a quick illustration of a TvP Reaper expand into more Barracks (instead of Factory).

This is the first part of a TvP Reaper expand. There are two main popular follow ups from here, 1. 3x Barracks and 2. Early Engineering Bay.

You can read a detailed break down of the early Engineering Bay build HERE.

Subsequently, just shape up to a standard game.

One thing I like about Flash is that he is worth studying. His choices are consistent, and hence, it is easy for me to learn. Flash always actively scouts, and he always has a planned answer against various builds. One of the common builds are Blink Stalkers. In the current metagame, a one base Blink Stalker build has almost extincted, and a two base build can either be an all-in or a Blink into Colossus tech. The Twilight Council is usually down around 5:00 (I just remember it as 5:00) for a one gas Gateway expand build. The rule of thumb I use as a casual player is that around 5:00, the tech path building will be down for Protoss most of the time, for example, the Stargate for a macro Oracle opening. You can definitely be gosu and be specific with openings and timings, but 5:00 is the timing that I like to scout with my Reaper.

So what does Flash do when he scouted Blink Stalkers?

In the above Proleague Grand Final game, Flash used a three Barracks variation against PartinG. He scouted the Twilight Council at around 5:00 (like I had mentioned earlier). The standard reaction is to build Bunkers at the natural and the main where the Stalkers can blink in. Flash did something more.

He immediately moved four Marines to the left side of the map and hide them at near PartinG’s base. This is meant to be used as a counter attack later in the game. Thus, the path the Marines took is meant to avoid being scouted. Incidentally, PartinG’s Probe was just outside Flash’s base and “scouted” the four Marines. That didn’t change the plan, as Flash still moved the Marines out.

This move is very similar to what Polt previously did. It is based on the fact that Protoss does not have anything at his or her base when the blink attack hits. The four Marines would have been uncontested against the the Probes. If Protoss does one round of warp in defensively, the four Marines have probably done their job to the whole situation.

Interestingly, upon being scouted, PartinG did not commit to the blink and reasonably so. He transited into relatively early Colossus tech instead. Two base blink usually hits at around 8:30, Flash timed the counter attack accordingly although PartinG did not execute the attack. The impact of the four Marines still can be seen as there was nothing but a Mothership Core. Normally, the Mothership Core would be at the other side of the map to provide high ground vision for the Stalkers. Still, a Photon Overcharge was forced.

The same situation happened against Zest in the IEM qualifier game above. Similarly, Flash’s Reaper scouted at 5:00 and spotted the Twilight Council. This time he didn’t do the tactical movement of hiding four Marines. You can probably theorise that this is because Zest and Flash are teammates and they know each other’s move. Before I go into what Flash did differently in this game, I want to talk about the PartinG game. Flash’s reaction basically assumed that PartinG is likely to follow through with the blink. So he prepared the Marine run by and Bunkers accordingly. His reaction is consistent with his thinking. Up till he knew that the blink attack wasn’t going to happen based on the timing, then he moved out.

In the Zest game, Flash did not immediately assume that Zest is going to follow through with blink. He sent a single Marine, who took more or less the same path of the four Marines in the PartinG game, right after he scouted the Twilight Council. This was meant to scout the third and the gas timing at the natural. The Marine saw no third, and then saw the gas being taken at the natural at around 7:00. The gas at the natural was a sign that Protoss is teching and not attacking. This indirectly suggested that Zest wasn’t going to do a blink attack, but tech up to Colossus (most common tech path). From these tiny moves, you can tell what was going through Flash’s mind.

After Flash knew that the blink attack isn’t coming, he decided to move his bio across the map for a counter attack. This attack sync well with the Stim research timing. 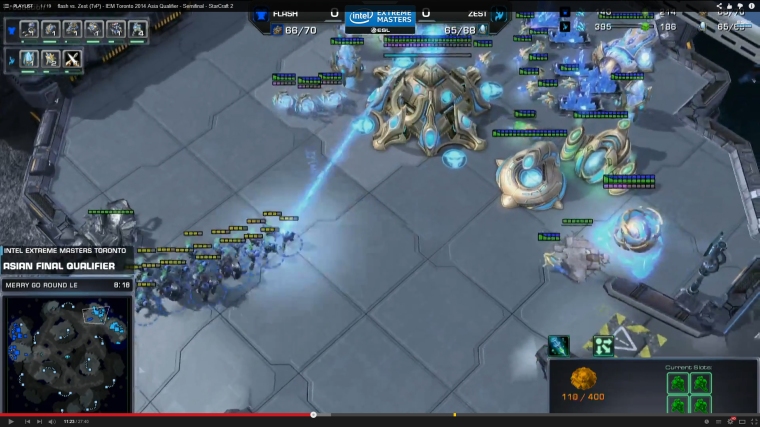 Vs. Phoenix and Colossus

The Phoenix Colossus style has become quite popular and it has been one of the common help-me-thread topics. Classic used this style against Flash in both game 2 and 3 (game 1 is not in the vod), as shown below.

The reaction from Flash is clear. Vikings. As many as you can afford.

In game 3, Flash had three Starports with Reactor to produce Vikings against the Phoenix Colossus composition. Flash started the game with a 14CC into two Barracks, then a quick third Command Centre. I am not sure if you can afford three Starport production with a more standard opening. In game 2, Flash had problem supporting the production beyond two Starports in the mid game. This could also be due to the earlier economical damage. Normally, Flash will put down the second Starport after the four and fifth Barracks, when he played against a Colossus composition without Phoenix. For example, in the game whereby herO used a more conventional Colossus style against Flash (vod below).

Flash did another standard Reaper expand into three Barracks opening against Pigbaby. Interestingly, he started Combat Shield instead of Stim when the Tech Lab completes. This is very rare in TvP. In game 1, this is not a reaction. He did not scouted what is the tech path of Pigbaby (Stargate), and he did not see the two Gateways before he chose Combat Shield. Furthermore, he started a Marauder early. Taken together, it seems to me that he’s lining up for a timing before his Medivacs are out. Somehow it countered the three Gateway timing of Pigbaby.

In game 2, Flash executed the Combat Shield timing. The result was weird. The exchange was 13 Marines and 2 Marauders for 13 Probes (and a Photon Overcharge). I don’t see it being a good timing. Moreover, if Pigbaby micro the Probes better, the result would be even less favorable for Flash. This looks Bomber-ish style.

3 thoughts on “Learning TvP from Flash”